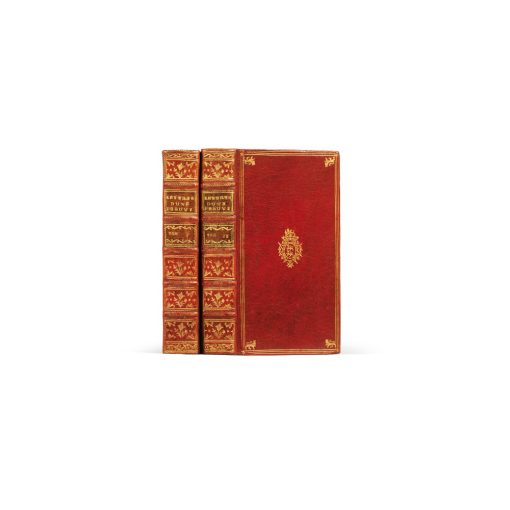 This rare edition of the Lettres d’une péruvienne is the only one,
with the first, where the author participated.

Enlarged second edition of this satirical book
that was censured.

A precious copy, one of the few printed
on large thick Dutch paper,
preserved in its contemporary morocco binding
with the arms of the marquis de Paulmy.

Second enlarged edition of Madame de Graffigny’s masterpiece which was censored on 28 July 1765.

It is the only one, with the first, where the author participated. It is decorated with two engraved titles, 2 figures and 2 vignettes by Eisen, engraved by Delafosse.

This book had numerous editions and was translated into several languages.

The first edition was published in 1747, after the author had already garnered some recognition with her Lettres sur Voltaire, who had welcomed her in Cirey when she sought refuge.

“The first edition of Lettres d’une Péruvienne appeared in 1747. Graffigny revised the novel for the 1752 edition, making numerous small changes and corrections throughout. Most important, she added two entirely new letters (29 and 34), reworked the original letter 28 and included part of it in a new letter 30.

She used the Lettres persanes by Montesquieu as a model.

Picking up Montesquieu’s exotic vein and the epistolary style of his Lettres persanes, Françoise de Graffigny denounces the injustices of her society under the fictive identity of Zilia, “a young Peruvian exiled in France, who writes to her lover, Aza : arriving in an unknown world, she slowly manages to penetrate it, learn its customs and is finally able to judge Parisian society outside of its traditional hypocrisy.

The delicacy and preciousness of some of her descriptions have some saying that she brilliantly managed to add to Montesquieu’s masterpiece a pinch of Richardson’s Pamela.

Be that as it may, her novel met with resounding success with her contemporaries, who saw themselves in her intelligent blend of clear ideas, subtle criticism and emphatic verve.” (Laffont-Bompiani)

The author, a friend of Rousseau, borrows from the philosopher the dream of a natural world but which, for her, would be incarnated by a woman. As a feminist, she denounces, in particular in her letter 34, the difficult conditions of the women of her time.

Mme de Graffigny knows how to marry the most incisive satire (it was said that Turgot was inspired by her work for his social and economic reforms) with the most delicate and exquisite sense of decorum.

A precious and beautiful copy, one of the few printed on large thick Dutch paper, wide-margined, preserved in its contemporary morocco binding with the arms of the marquis de Paulmy.

The marquis de Paulmy dedicated his free time to literature and history ; he wrote some short stories and undertook the publication of the Mélanges tires d’une grande bibliothèque, in 65 volumes.

He had established a beautiful library which he sold in 1785 to the comte d’Artois ; this makes up the principal collection of the Bibliothèque de l’Arsenal.