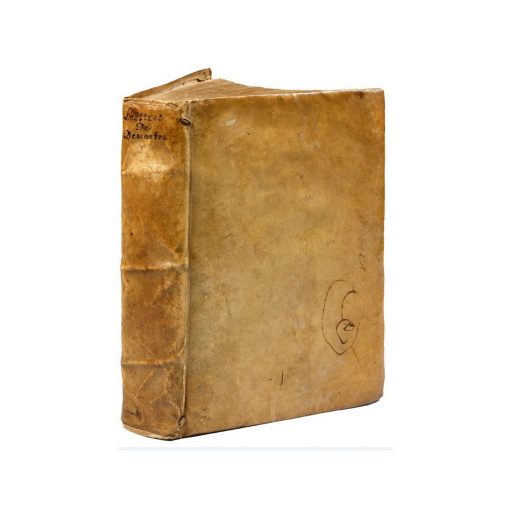 First edition of the Lettres by Descartes
addressed to the queen of Sweden, the princess Elisabeth and Mersenne.

The publication of the letters of Descartes (1657-1667) had cooled the Jansenists’ zeal towards him, d’Arnauld’s and de Nicole’s in particular and certainly Pascal’s also, who accused him of wanting to forgo God in his metaphysics.

“Despite the attacks targeting him, his reputation as an innovative philosopher had surpassed the small scholarly world and reached the world of the patron princes. The princess Elisabeth, the Palatine princess exiled in The Hague, who was an educated woman and interested in philosophy, reached out to him and they maintained a steady correspondence, which makes up the bulk of the Letters. The marquis of Newcastle and the queen Christine of Sweden did the same.” (Dictionnaire des auteurs)

From 1642 to 1649, the period of his life ranging from the Méditations métaphysiques to his death in Stockholm, Descartes maintained a steady correspondence with the princess Elisabeth, daughter of Frederick V, Palatine elector and king of Bohemia. This cultivated woman, who had studied mathematics, had read the Méditations métaphysiques with much interest and great admiration. Descartes kept her up to date on his own writings, recommended books and discussed physics, philosophy and mathematics with her.

“Clerselier had chosen the letters of this volume well : those interested in questions on morals, physics and even medicine were satisfied ; the names of the queen Christine and the princess Elisabeth, both still alive, and also of this English gentleman, M. More, and this lord whose name he kept a secret, attracted attention and gave the philosopher who had written to these illustrious individuals great prestige. The success of the book was inevitable and two years later, when Clerselier published a second volume, he acknowledged in the preface that the first one was already “completely sold”.” (Œuvres de Descartes, Adam et Tannery)

This correspondence is fascinating because Descartes explains himself and develops certain points exposed in his work ; it is also one of the only documents that we have that allow us to peer into the thinker’s intimate thoughts.

Handwritten ex-libris from 1685 on title page.