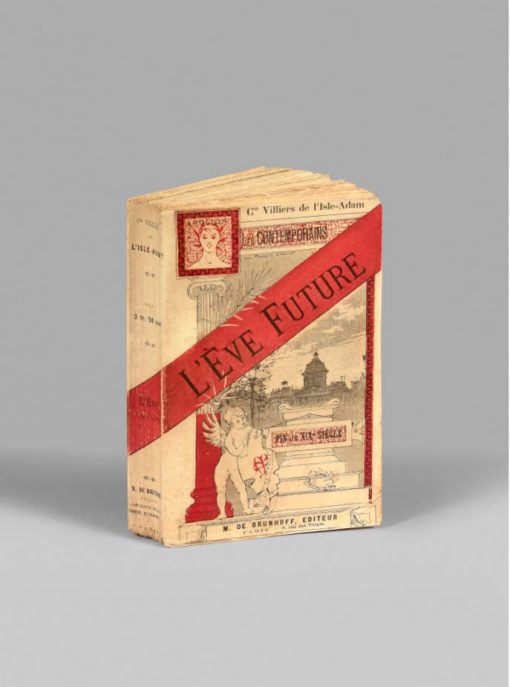 A beautiful copy preserved in its wrappers, as issued,
enriched with an autographed message signed by the author
and an autographed passage of the novel.

First edition of this masterpiece by Villiers de L’Isle-Adam dedicated to “the dreamers. The mockers.”
Carteret, II, 472 ; Clouzot, 277.

It is enriched with an autographed message signed by the author.

This romanesque masterpiece by Villiers de L’Isle-Adam is a contribution to the nascent genre of science-fiction. Representing the impossible quest of perfect love, the heroine is transformed by the inventor Thomas Edison into an electrified robot with a very human appearance. How can one not fall in love with this charming and incredibly intelligent automaton?

She lacks a soul, maybe, but the source of her intelligence lies inside her, in two golden phonographs where the thoughts of the great poets and metaphysicians are recorded.

The surrealists praised the irony of this forsaken poet, his black humor, his attention to fantasy. Alfred Jarry and Raymond Roussel are not far.

“L’Eve future is a tale with magical highlights: enchanting lyricism and irony are blended to compose, in this savant enterprise, a narrative built around light and shadows. This work is closely linked to the Contes cruels and, like it, inspired by an absolute metaphysical idealism. It is by far one of the author’s best texts, one of the most curious and suggestive.” (Dictionnaire des Œuvres)

“L’Eve future, Villiers de l’Isle-Adam’s major novel, testifies, with an extreme finesse, to the vivacity of the myth of the mad scientist.” (P. S.)

A beautiful copy, preserved in wrappers, untrimmed, as issued, enriched with an autographed message signed by the author to Rodolphe Salis.

Rodolphe Salis (1851-1897) is the creator of the Parisian cabaret Le Chat Noir, which he opened in 1881 and which draws its name from one of Edgar Poe’s histoire extraordinaire. His friend Villiers de l’Isle-Adam assiduously frequented the place, a symbol of the spirit of Montmartre.

The copy is also enriched with a short passage from the novel handwritten by the author and containing many corrections.