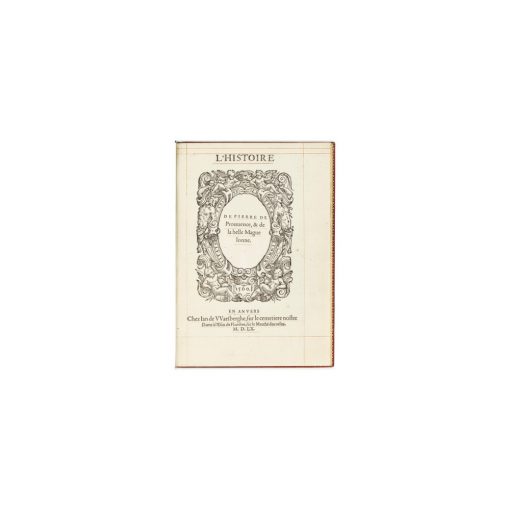 A precious edition of this novel of Provençal chivalry.

A precious and very rare edition in round letters of this novel of Provençal chivalry.

It is decorated with a beautiful Renaissance frame on the title.

Written in the 12th century by Bernard de Trevies, this renowned novel tells the sentimental adventures of Pierre, the son of the comte de Provence, and of the beautiful Maguelonne, daughter of the king of Naples, marked by the separation of the two lovers and their final reunion.

The two written versions of this story, one, more ancient, from the first half of the 15th century, the other, shorter, from 1453, appeared in the proximity of the House of Anjou-Provence before being printed in Lyon in 1480.

The novel of Pierre de Provence et la belle Maguelonne was, since the 15th century, very popular in the countries of Europe and Asia. M. Alfred Coville believed the novel was inspired by ancient legends going back to the 12th century. He underlined the literary merits of the novel itself whose author, unknown, had a very real talent as a writer.

This chivalry novel was always very successful, as is attested by the several translations in other languages and the important number of editions that followed up until the 17th century and even after, in the collection of the Bibliothèque bleue.

Bibliographers underline the extreme rarity of most editions of this novel which have all been sold for important amounts in public sales.

Deschamps highlights the “considerable” price of 2 850 francs or reached by the copy from the 1524 edition at the Brunet sale (Supplément, II, 235).

The copy mentioned by Brunet came from the library of Armand Bertin ; it then passed on to the Firmin-Didot collection, and then Hector de Backer’s, where it was sold 3 100 francs or, one of the most significant prices of the sale of 17-20 February 1926 where it was described as such: “only copy mentioned by Brunet, very rare edition, of this novel of which all old editions are sought-after”.

A precious copy, ruled, of one of the first novels of Provençal chivalry, preserved in its fine red morocco binding made by Trautz-Bauzonnet.

Our research into public international institutions have allowed us to locate only one copy of this very rare edition: Houghton Library, Harvard University.