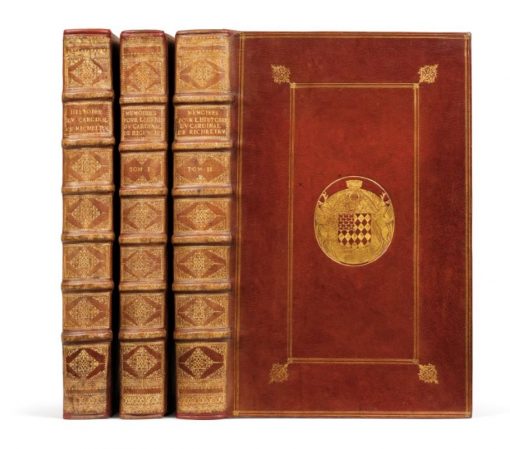 Only copy of the first edition complete with all 3 inventoried volumes
printed on large paper bound in contemporary armorial morocco.

First edition of both works by Antoine Aubery written for the Duchess of Aiguillon, the cardinal Richelieu’s mother, and dedicated to “Monseigneur l’éminentissime Cardinal Mazarin”.
Aubery narrates the life and career of the cardinal de Richelieu (1585-1642).

“Bishop of Luçon at 21 years of age, he represents the clergy at the états généraux of 1614 ; a favorite of the “dévot” party, he earns the favors of Marie de Medici, who appoints him Secretary of War (1616). In 1620, he negotiates the reconciliation between Louis XIII and his mother. Named cardinal in 1622, he enters the king’s council in 1624 and rapidly becomes its leader. His objective is to assert the absolute power of the king by breaking up all the different cliques and special regimes. He quietens the nobility by forbidding duels (edicts of 1626), wanting to see it become the enforcer of provincial law (assembly of the provincial elite, 1626-1627) ; he gets rid of rebellious nobles (Chalais, Cinq-Mars, de Thou). At the same time, he works on reducing the power of the Protestants, which he manages through the surrender of La Rochelle ; after the raid of Privas (1629), he agrees to give Protestants freedom of worship but takes away their military privileges (grâce d’Alès, 1629). In foreign affairs, he defies the house of Austria.

After the occupation of Valteline (1624-1625), Richelieu allies himself with German Protestants against the Habsburgs, takes Pignerol and Saluces (1630). He reconciles Sweden with Poland (1629), giving the latter the opportunity of intervening against Austria. After Gustave-Adolphe’s death he declares war on Spain (1635), occupies Brisach (1638) and conquers Portugal (1640) and the Roussillon (1642). He implements a strictly mercantile economic policy and creates chartered monopoly companies. He has the Sorbonne and the Palais-Cardinal (today’s Palais-Royal) built and founds the Académie française (1635). Active partisan of administrative centralization, he undertakes important financial, military and legislative reforms (code Michau)”.

Antoine Aubery, born in Paris on the 18th of May 1616, often called on MM. Dupuy, de Thou, or de Vilevault in order to converse with the intellectuals who gathered there. When taking a break from his studies, he would read a few pages of Vaugelas’ Remarks. He not only spoke Latin and Greek but also Italian, Spanish and English and could read books in those three languages.

Lenglet tells us that his Histoire du cardinal de Richelieu was written on “good memories”.

Precious copy, one of the only complete ones containing both works, here printed on large paper and bound in sumptuous contemporary red morocco bearing the coat of arms and cipher of Guillaume Ier de Lamoignon, marquis of Basville and count of Launay-Courson, son of Chrétien, first president of the Paris Parliament, and of Marie des Landes, born in Paris on October 23rd, 1617. He became a member of said Parliament on December 14th, 1635, Master of Requests on December 15th, 1644 and first president on October 2nd, 1658 ; in December 1670, he was made marquis de Basville and count de Launay-Courson. Lamoignon sought to codify and unify the different laws and died in Paris on December 10th, 1677. He had married his cousin, Madeleine Potier, on the 14th of November, 1640.
A great lover of books, he began a famous book collection that stayed in his family for two centuries.
(O. Hermal, plche 2015).

Only one copy on large paper is listed by the bibliographers but was bound at a later time by the duke of Maine and only contained the first volume of the Histoire instead of the three here present.
This unique volume was sold 159 F at the sale of Louis Philippe and 14 500 € 15 years ago (Paris, 2 juin 2001).