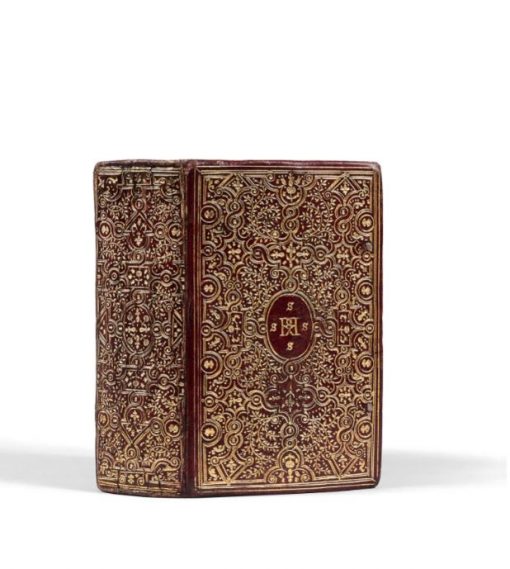 Precious edition of the Iliad, printed in 1604 by the Estienne in Geneva
preserved in its superb contemporary Present binding
with a beautiful fanfare decoration.

Charming bilingual edition in Greek and Latin given by Paul Estienne (1566-1627) in Geneva. Second edition of the Iliad given by the Estiennes, it contains the Latin version of the Greek-Italian humanist Francesco Porto edited by his father Henri II in 1589, and from which Paul Estienne removed the Centones, but added the Coluthus (Helen’s kidnapping) and the Tryphodorius.

The two books of the Iliad and the Odyssey are rarely found together (rare complete copies: Göttingen and British Library ; the Cambridge copy does not include the index of the first part).

Just like for the 1588-1589 editions, it is almost certain that the volumes were sold separately.

“This is the first volume of Estienne’s very rare edition of Homer, of which there is no copy either in the Paris Bibliothèque Nationale or in the Geneva Bibliothèque Publique et Universitaire ; at the turn of the century the thorough bibliographer Emile Legrand could locate only two copies to examine for his Bibliographie hellénique. The two volumes were undoubtedly available separately and this first volume is complete in itself, consisting of the entire Iliad, and of Estienne’s prefatory material : his preface to the reader, dedicatory epistle to Charles Baron of Zerotin, and his preface to Homer.

This is the only separate edition of Homer issued by Henri Estienne, and is based on the text of his Poetae Graeci Principes (n° 160) ; it is here accompanied by a facing Latin translation, believed to be by the Cretan scholar Franciscus Portus, who held the chair of Greek in Geneva until his death, in 1581 ; Portus’s translation is thoroughly revised by Estienne himself.” (Schreiber, 218)

« The main topic of the Iliad is an episode of the Trojan War : Achilles’ wrath.

A tangible proof of the persisting hold of the Iliad on the modern Western world’s imagination is that the editions, translations and inspired works have been incessant since the Renaissance. One can easily guess the reasons for this unique fortune when one takes a closer look : there, the great stakes of human existence and nature interact with an impressive intensity and complementary effects : hence Achilles’ anger and its apparently relentless plot twists only find their conclusion — and the work, its end — in pity (Achilles acknowledges that Priam is allowed to take his son’s body back); hence also the tragic aura that surrounds the characters but the also obvious presence of a powerful love of life that reveals itself in the Homeric hero’s behaviors.” (F. T.-P.)

A precious and very beautiful copy in contemporary morocco with a fanfare decoration.

Said to be “late fanfares”, the bindings rely on the typical elements of the 16th century fanfares but add new tools and more freedom in the drawings on the panels. A transitional binding, it dates back to 1604-1610, pivotal years where the fanfare fades out to make room for the panels with dotted tools by the great Parisian workshops like those of Florimond Badier, Le Gascon…

A remarkable Present copy stamped in the center with the monogram RR and four S-shapes, symbols of fidelity.