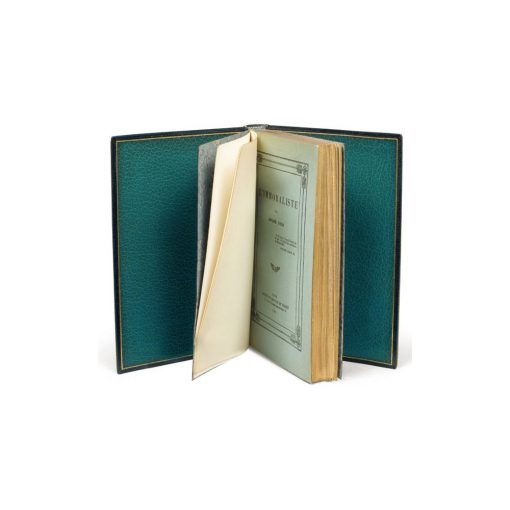 First edition of L’Immoraliste,
one of Gide’s most significant novels.

A beautiful untrimmed copy,
preserved in its fine morocco binding with a morocco doublure
created by E. Maylander.

First edition of one of Gide’s most significant novels, “which established his originality and mastery in the eyes of the intellectual public”.

It was printed in 300 justified copies, all on laid paper d’Arches.

“L’immoraliste is the first great novel by Gide and his first work to be published with the blue cover of the éditions du Mercure de France.” (Etudes gidiennes)

This novel, which met with growing success, recalls Les Nourritures terrestres. But it is more complex. Some pages are filled with lyricism. Some recreate, but with more refinement, the very matter of the Nourritures. While celebrating the euphoria of some instants, they show us the limit of an ideology that would be content with only building on sensuality ; sometimes the pages become satirical.

Gide considers his own enthusiasm with irony. He reviews his experiences and gives us, through the artifice of a work of art, the possibility of a conversation.

L’immoraliste remains one of the most striking of the author’s works : it asserts, for the first time, the classical purity of Gide’s style.

L’immoraliste plays an important part in André Gide’s work and life. It is the first in a series of more or less autobiographical novels : Si le grain ne meurt, les Faux-Monnayeurs and mostly the Journal. But if it foreshadows the work to come, L’Immoraliste seems to be a criticism of the exalted ideas of the author in Les Nourritures terrestres : the passion for individualism is now put into question.

“300 copies on laid paper d’Arches were published on the 20th of May 1902 from the Bussière presses in Saint-Amand, for the Société du Mercure de France, in an elegant blue cover that will become famous over time, as between 1902 and 1946 it was used for 25 of Gide’s novels ; the volumes of this “small blue collection”, whose print run oscillated between 120 and 550 copies, are today very sought-after by the bibliophiles. Well-received by the critics, this book established his originality and mastery in the eyes of the intellectual public. It is a work of maturity. From then on, it was Gide himself who came to be called “L’Immoraliste”.” (Claude Martin)

A beautiful untrimmed copy, preserved in its fine morocco binding with a morocco doublure created by E. Maylander.