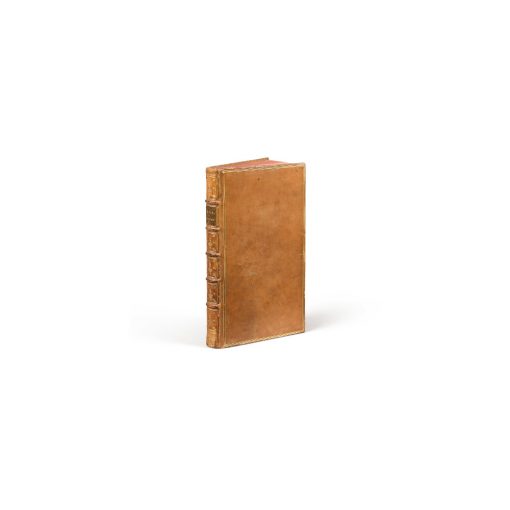 Very beautiful copy of the first edition of L’Ingénu,
preserved in its contemporary deluxe binding in full light-brown calf.

First edition of one of Voltaire’s great works in exceptional contemporary condition.

““L’Ingénu” is from the second half of 1767. On the 21st of July, d’Alembert wrote to Voltaire : “I heard mention of a novel titled “L’Ingénu”, which I can’t wait to read.” And Voltaire answered him, on August 3rd: “I must tell you ingeniously, my dear philosopher, that there is no L’Ingénu” ; he is a rational being; I had him fetched in Holland and Geneva; it might be some text like the one by the compère Mathieu… I have not made “l’Ingénu”, I never would have, I am innocent like the dove and would like to be prudent like the snake.” The first copies of l’Ingénu arrived in Paris at the end of August.” (Bengesco)

Voltaire refused to admit that he was the author when he authorized a Parisian editor to publish this tale; it was presented as being written by Monsieur de Laurens, the famous anticlerical satirist who had published, in 1764, “L’Évangile de la raison” and was going to publish the “Compère Mathieu”. Du Laurens was not risking anything; his writings were even more violent and he had left France for Holland a long time before. The Parisian editor Lacombe gave the text the following title “Le Huron ou l’Ingénu”, title under which the text is also known. The story of Huron, which takes place under the reign of Louis XIV, is presented to the readers as being a “true story derived from the manuscripts of père Quesnel » (the renowned theologian who had died at the beginning of the century).

A young man, who has always lived among the Hurons in America, arrives in Lower Brittany where a prior and his sister recognize him as being their nephew, Hercule de Kerkabon. Seeing as “he always naively says what he thinks and does what he wants”, and “being a good savage, he is called l’Ingénu”. Trusting in his natural intelligence, which is not corrupted by prejudice, he endures quite a many misadventures during which his apparently naïve reactions push him to proffer some very insightful judgements. Converted by his new family, he is baptized and falls in love with his godmother, Mlle de Saint-Yves whom, according to the Church, he cannot marry because of their spiritual link. After having bravely fought off an English attack in Britany, he goes to Versailles to find out the price of his services and to try to obtain the permission to marry his fiancée. On his way, he dines with some Huguenots and then arrives at court. His demands are not heard, on the contrary, he is sent to the Bastille for having displeased a servant. His cellmate is a Jansenist, who instructs him and marvels over his perspicacity and rightmindedness : “His intelligence has not been bent by error and has remained upright.” Through his good sense, he manages to change some of the Jansenist’s opinions. Mlle de Saint-Yves escapes from the convent where she had been locked up, leaves for Versailles and manages to escape those pursuing her. She is received by a deputy minister, Saint-Pouange, and demands that her lover be released. She resists his dishonest proposals but caves after a while because a Jesuit had told her that she must free the Ingenu, whatever the costs. As the liberation of the Ingenu is celebrated, Mlle de Saint-Yves falls ill of shame and suffering: some doctors (made ridicule by the author) rush to her bedside, and she dies. M. de Saint-Pouange, who is not all that bad, feels remorse and gets Hercule de Kerkabon, who has learned much and has become a philosopher, to accept an officer’s charge: “Le temps adoucit tout.”

This philosophical tale is very spirited. The problem here addressed is the one of social happiness, which is hindered by conventions and religion, and religion has no business meddling with people’s intimate lives. Love is the element that sets forth the events, and the events call for reflection. This fiction, presented in the form of a short novel, allows Voltaire to spread some philosophical ideas. He criticizes the abuses of society and attacks Jesuits, Jansenists, high civil servants, doctors. He defends the “simple nature”, the “good savage”, against the customs imposed by civilization and which reason cannot allow.

The tone is sharp, witty, joyful.

“L’Ingénu” possesses all of the brilliant qualities that made Voltaire so successful.

Very beautiful copy of this important first edition, preserved in its contemporary deluxe binding in full light-brown calf; the copies are usually bound in simple roan or ordinary calf.

From the reputed collection of J. Dennery, with ex-libris.