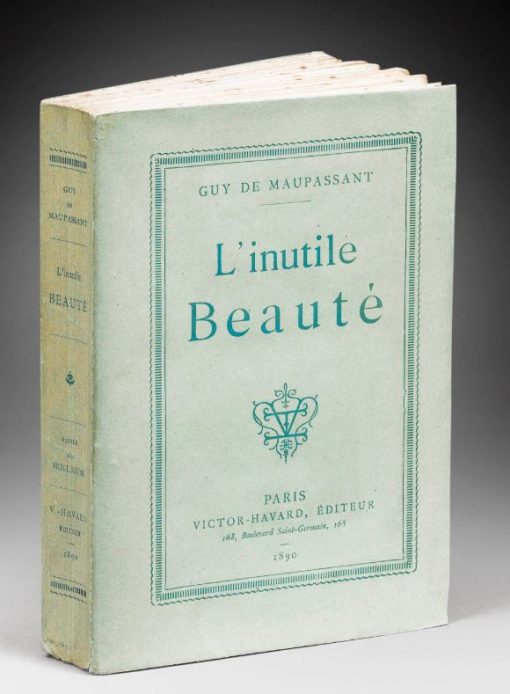 A very beautiful copy, with wide margins,
one of the few belonging to the leading copies,
preserved in its wrappers, as issued.

An untrimmed and partly uncut copy, preserved in its wrappers, as issued, some foxing on the edges, jacket and case-binding. Publisher’s wrappers.

Rare first edition of this collection of eleven short stories by Maupassant, the last collection to be published in his lifetime.

A precious leading copy, one of 50 on Dutch paper, unjustified, only large paper.

“L’Inutile beauté is the rarest short story I have ever written” write Maupassant in 1890.

This short story is a digest of all of Maupassant’s themes: the difficult coexistence of the sexes, the powerful doubt that takes over human relations, the troubling strangeness of maternity figures, the uncertainties of fatherhood and last but not least, the mystery of women.

L’Inutile beauté immediately stands out because of its singularity. The narrative is not in keeping with what Maupassant had written up to then. Far from the figures of the cunning woman or the endless victim, this story’s heroine is a young woman who takes her life in her own hands and stands by her choices, which are at odds with the collective conscious and with the roles she imposes on herself. The portrayal of the woman in this story is a kind of social and human breaking wave instigated by the comtesse de Mascaret.

In the foreground of L’Inutile beauté is the crisis of married couples, a new image of men and women.

Guy de Maupassant submits his first literary essays, poems and stories to Gustave Flaubert. The master from Croisset encourages him, drives him and gets him to meet Zola, Huysmans, Daudet and the Goncourt brothers.

Rare first edition; a precious and beautiful copy with wide margins, from the leading copies and kept in its contemporary wrappers, as issued, a rare and sought-after condition.