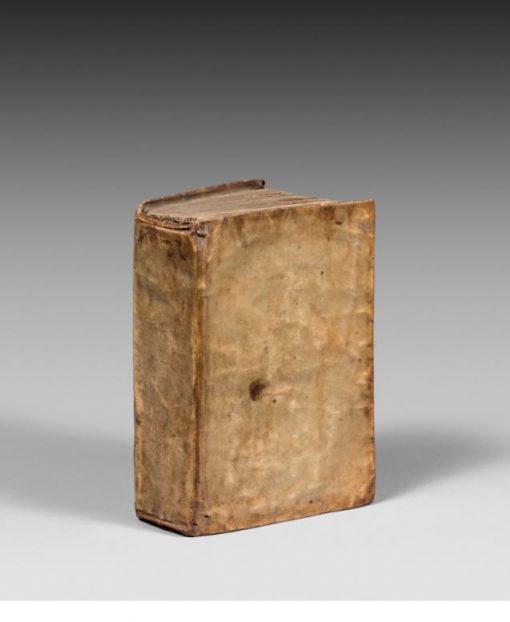 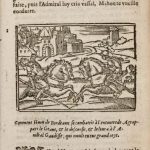 The old edition of Huon de Bordeaux with the most illustrations (27 woodcuts).

The editions mentioned by Bechtel are
only known to be of 2, 3 or 4 complete copies.

A remarkable copy, the only one listed complete in contemporary vellum.

The edition of Huon de Bordeaux with the most illustrations (27 woodcuts).

“Rare Rouen edition of the popular story of Huon de Bordeaux. Huon is a knight who, after unwittingly killing Charlot, the son of Emperor Charlemagne, is given a reprieve from death on condition that he fulfills a number of seemingly impossible tasks : he must travel to the court of the Amir in Babylon and return with a handful of the Amir’s hair and teeth, kill the Amir’s mightiest knight, and three times kiss the Amir’s daughter, Esclarmonde. All these Huon eventually achieves with the assistance of the fairy king Oberon. Ill. with 24 woodcuts in text (incl. repeats). Large woodcut on title, part title and at the end.” (Goldsmith (BL) H-688. – Not in BnF, Le livre Populaire).

Very rare edition in prose printed in round letters in Rouen mentioned by Brunet (III, 382).

“All of these editions are more or less rare”, says Brunet.

Huon de Bordeaux is a chivalry novel and chanson de geste from the 13th century, that blends epic elements with Oriental and Britton magic. It is the tale of the adventures in the Orient of Huon, a baron of Charlemagne. He is accompanied by a dwarf, Oberon, who is at the origin of a cycle of several poems. The printed prose version, which includes the novel and its sequels, separated after a Burgundy reorganization in 1455 of which we have no manuscript, has known numerous editions starting with the one from Michel Le Noir in 1513 and in the Bibliothèque bleue until the 19th century.

“In the wake of the song of Huon de Bordeaux, written in Picard country between 1260 and 1268 (M. Rossi), a cycle was created that a manuscript from Turin dating from 1311 renders mostly complete and comprising of approximately 32 000 verses.

The text, titled Huon de Bordeaux (10 553 v.) has had a fortunate fate. Sequels rapidly followed, as did a prologue, in alexandrines, first (14 796 verses in the Paris manuscript, BN, fr. 1451). In the 15th century, a new prose version, that was only printed in the 16th century, is created and this one will know at least 32 editions, updated editions or re-prints until 1859. In England, it will inspire Shakespeare the character of Oberon in Midsummer Night’s Dream. It will inspire Geoffrey Chaucer, Spenser, Ben Johnson. In Germany, Wieland will draw from it to write his Oberon, of which a booklet will be written that Weber will put to music.

What people must have liked, what we still appreciate about this text, is its extraordinary movement, the ease with which the magical blends with the ordinary and, finally, the depth and veracity of the characters.

The story begins under Charlemagne. Auberon is the prologue of Huon de Bordeaux. Concerning the small king who, in the initial poem, presented himself as the son of Julius Caesar and the fairy Morgue, king Arthur’s sister, the author’s main preoccupation is to forge him a prestigious genealogy.

What is most original about Huon de Bordeaux is the harmonious combination, by an attractive story teller, of traditional epic elements and narrative processes that are unique to Britton novels.”

A precious copy, the only one listed in contemporary vellum.