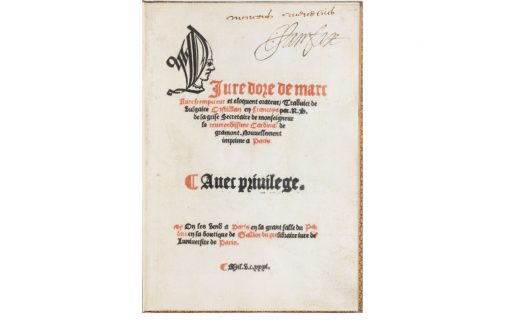 Very rare, Bechtel mentions no copy on the private market.

From the library of Fairfax Murray.

Red morocco, triple gilt fillets around the covers, ribbed spine with gilt fillets, title and date in gilt, double gilt fillets on leading edges, inner gilt roll-stamp, gilt edges, title printed in red and black, a small cut out on the title was repaired without loss of text. Binding signed by Closs.

It is said that Le Livre Doré de Marc Aurèle demanded eleven years of work from the author and met with great success upon publication. It is a novel filled with anecdotes much similar to the Cyclopédie by Xénophon and where the author offers Charles V the example of the most perfect prince in Ancient Greece and Rome.

La Fontaine drew from this for his fable of the Paysan du Danube.

“This book of piety met with considerable success in the 16th and 17th century, in Spain and elsewhere. In one century and a half, 33 Spanish edition and 58 others in French, Italian, German, English and Latin were given. Guevara wanted to educate the princes, explain to them how to fill every hour of the day to the best of their soul’s needs and how to govern the people in a good Christian way […]. His work also seemed to sum up all the wisdom of the Ancients, and the author’s starkness was seen with admiration.” (Dictionnaire des Œuvres)

Antonio de Guevara (1481-1545) is a Franciscan monk, an essayist and a Spanish chronicler. Early on in his life he arrived at the court of Ferdinand the Catholic as a page to the prince don Juan. He resolved to become a religious man. He became a predicator and, benefiting from his good reputation, became, in 1512, advisor to the great captain. Having managed to please Charles V who, in 1516, had inherited the Spanish crown, he took part in his fight against the “Comuneros”. He was appointed court predicator in 1521, inquisitor of Toledo in 1525 and imperial chronicler in 1527. The following year he became bishop of Guadix. After having escorted Charles V in his brilliant expedition against Tunis, he left the bishopric of Guadix for the one of Mondońedo (1539) where he stayed till his death.

A writer of very sure taste, a precursor of conceptismo, Guevara acquired a justified reputation for having contributed to the establishment of Castillan prose in the 16th century.