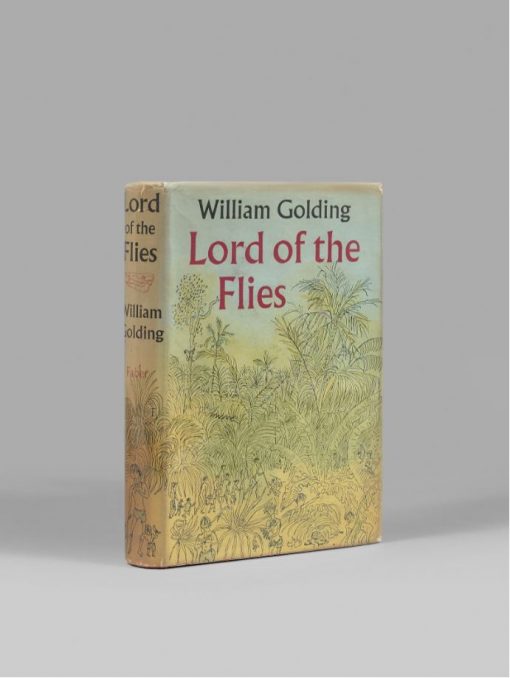 Golding, William
Lord of the Flies,
.

First edition of Golding’s first book, one of the best-known works in modern literature.

A lovely copy preserved in its original publisher’s cloth, with its dust jacket, in collector’s condition.

Golding, William. Lord of the Flies.
Faber and Faber, London, 1954.

First edition of Golding’s first book, one of the best-known works in modern literature.

The author’s first book, a post-apocalyptic novel of boys on a remote island descending into barbarity.

“A collection of modern fiction would never be complete without it.” (Connolly, 136)

“Lord of the Flies is not an examination of the idiosyncratic nature of a group of young English boys, but of the essential nature of humanity itself, its predisposition to violence and cruelty when removed from the restraining influences of civilization…” (K. McCarron, Oxford DNB)

This novel tells the story of a group of English school children evacuated during a nuclear war. The plane they are traveling on crashes on a desert island : all of the adults are killed : the children are by themselves.

Golding adopts an opposite view to the previous century’s optimism. In the beginning, the children try to organize themselves politically and socially. However, they rapidly err into a form of primitive savagery that cancels bit by bit the emblems of the civilized world.

Behind its apparent simplicity, the inexorable advancement of the action elevates this anecdotal story to something beyond daily reality in a process that is as mathematical as it is tragic. “It is maybe through books, stories, poetry, conferences that we, who have humanity’s ear, will be able to bring man closer to the perilous security of a world of peace and love.” This is how William Golding defined, in his acceptance speech for the Nobel of literature, a philosophy that the Lord of the Flies already captured thirty years earlier. (A. Blayac)

Originally published in 1954, The Lord of the Flies was named to Modern Library’s 100 Greatest Novels List of the twentieth century.

In the early 1960s cultural commentators noted that Lord of the Flies was replacing Salinger’s Catcher in the Rye as the bible of the American adolescent. Since then, this masterpiece has established itself as a modern classic.

“This brilliant work is a frightening parody on man’s return to that state of darkness from which it took him thousands of years to emerge. Fully to succeed, a fantasy must approach very close to reality. Lord of the Flies does. It must also be superbly written. It is.” (The New York Times Book Review)

A lovely copy of the true first edition preserved in its original publisher’s cloth, with its dust jacket, in collector’s condition.