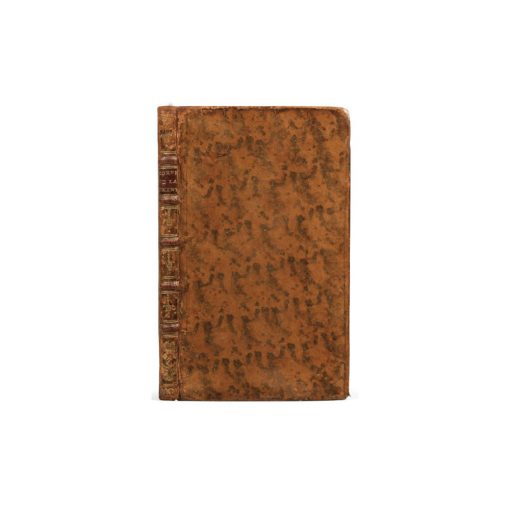 A copy preserved in its contemporary binding
with the arms of Louis Charles de Bourbon, comte d’Eu on spine.

“The approval from 19 September 1755 is at the bottom of page 72. L’Orphelin de la Chine is followed by a letter by Voltaire to Jean Jacques Rousseau. This letter, from the 30th of August 1755, was printed, on a different copy, in the Mercure of October 1755, p.124, and reproduced, with the alterations, in the Mercure of November 1755, p.56. J. J. Rousseau’s answer is from 10 September 1755. (…) In his letter from September 20th to Lambert, Voltaire encourages the bookseller to print his letter to J. J. Rousseau and the latter’s response to it.” (Bengesco)

“Even before elaborating the final version of the “Orphelin”, Voltaire’s main idea was to refute Rousseau’s paradox against the notion of progress. Voltaire insists on the contrast civilization-barbary in his famous letter from 30 August 1755 of which the first edition is added to [this] princeps edition of the “Orphelin”. (Dictionnaire Voltaire, Hachette, p. 151)

The premiere took place on the 20th of August 1755, and was a great success. Voltaire got his inspiration from “L’Orphelin de la famille Zhao”, the only work passed on to posterity by the Chinese playwright Ji Junxiang (13th century).

“It is after his break from the king of Prussia, and as he was wandering without asylum on the French border, that Voltaire borrowed the idea of his play from the Chinese themselves, whose history he was studying for his Essai sur les mœurs. Having found out that his Pucelle avec des vers contre le roi, contre madame de Pompadour, contre Richelieu, etc was going to be printed against his will, Voltaire sought to limit the storm with a theatrical success so that the public would be in his favor. Once the play was finished, the author saw that it could pass as a satire against the Pompadour ; because it was about a married woman who refused the king’s, her master’s, favors. But all in all, Voltaire managed to come out on top by sending a copy to the king’s favorite and, defying the villains, then gave his play to the actors. L’Orphelin de la Chine met with great success. The first edition of L’Orphelin de la Chine has its little peculiarities also. Voltaire had first thought about dedicating his tragedy to the one who inspired him, M. d’Argental ; but he thought better of it and addressed it to the duc de Richelieu, whom he was accused of having slandered in his Pucelle. If Richelieu’s name was present at the beginning of the Orphelin, at the end, it was the one of the modern Diogenes, J. J. Rousseau, that appeared. Voltaire had printed after his play the long letter he had addressed to Rousseau to thank him for his copy of the discours sur l’inégalité, and in which he enumerated all his literary distastes.” (Georges Avenel)

In his tragedy, Voltaire puts the great Mongol conqueror in an unlikely historical situation: the fierce conqueror, in love with the Chinese Idamé, lets himself be won over by the sweet mores of his Confucian subjects. In fact, Voltaire himself, in a letter addressed to the count d’Argental on 8 March 1755, doesn’t hesitate to define his characters as such: “It is Arlequin polished by love.” By staging such a situation, Voltaire wanted to show that he had faith in the progress of civilization.

Copy preserved in its contemporary binding with the arms of Louis-Charles de Bourbon, comte d’Eu (1701-1775), on the spine.