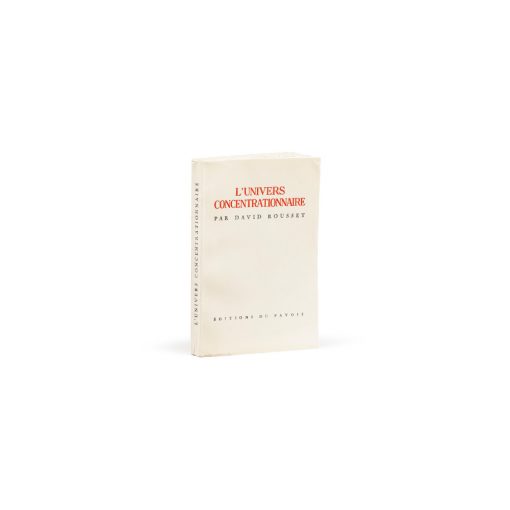 A beautiful copy, one of 100 from the leading copies,
preserved in its publisher’s wrappers, as issued.

This first written testimony on the Nazi camps is today considered, rightly so, as a reference book on this topic.

One of 100 from the leading copies printed on superior featherweight paper.

In the years immediately after World War II, French accounts of German concentration camps tended to focus on their political significance rather than on the barbarities of genocide and the Final Solution. David Rousset was instrumental in establishing this tendency with two books written and published shortly after the end of the war, L’Univers concentrationnaire and Les Jours de notre mort.

The first, in barely more than one hundred pages, combines anecdotal memory and Marxist analysis to propose an interpretation of the camps as “the gangrene of a whole economic and social system”.

David Rousset was the first deported to describe the mechanisms and the logic of the concentration camps that the Nazis pushed to its most horrendous limits. His testimony tenaciously denounces the different bureaucratic and ideological levels of this system. He also pays homage to the men and women who, at the worst time of humanity, managed to stay hopeful and united.

This testimony by David Rousset, a Resistant deported to Neuengamme, close to Hamburg, describes the daily life in the camps and its implacable discipline, imposed by the SS.

The hierarchy between the prisoners of different origins, the political divisions between political prisoners and the others, the constant fight for survival.

A beautiful copy, one of 100 from the leading copies, preserved in its publisher’s wrappers, as issued.