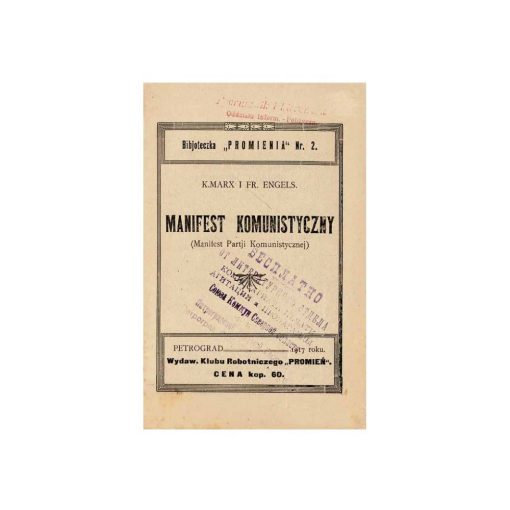 “One of the outstanding political documents of all times” (PMM).

Very rare Polish edition of the Manifest of the communist party,
published the year before the Russian revolution.

The copy is partly uncut,
preserved in its contemporary bindings,
as issued and coming from the library of Marcel Bekus,
with library seal.

Publisher’s wrappers, some foxing on the covers. Contemporary binding.

Very rare Polish edition of the Manifest of the communist party, published the year before the Russian revolution.

“One of the outstanding political documents of all times.” (PMM)

On January 24th 1917, president Wilson, in his address to the Senate, speaks of an independent, autonomous, unified Poland, and the new Russian government promises an “independent Polish state” on March 29th 1917.

The Polish conservatives who may have had Russian feelings ignore them since the Revolution and turn to Vienna for their interests.

“The fact that a new Polish edition of the Communist Manifesto has become necessary gives rise to various thoughts.

First of all, it is noteworthy that of late the Manifesto has become an index, as it were, of the development of large-scale industry on the European continent. In proportion as large-scale industry expands in a given country, the demand grows among the workers of that country for enlightenment regarding their position as the working class in relation to the possessing classes, the socialist movement spreads among them and the demand for the Manifesto increases. Thus, not only the state of the labor movement but also the degree of development of large-scale industry can be measured with fair accuracy in every country by the number of copies of the Manifesto circulated in the language of that country.

Accordingly, the new Polish edition indicates a decided progress of Polish industry. And there can be no doubt whatever that this progress since the previous edition published ten years ago has actually taken place. Russian Poland, has become the big industrial region of the Russian Empire. The disadvantages — for the Polish manufacturers and the Russian government — are manifest in the rapid spread of socialist ideas among the Polish workers and in the growing demand for the Manifesto.

But the rapid development of Polish industry, outstripping that of Russia, is in its turn a new proof of the inexhaustible vitality of the Polish people and a new guarantee of its impending national restoration. And the restoration of an independent and strong Poland is a matter which concerns not only the Poles but all of us. A sincere international collaboration of the European nations is possible only if each of these nations is fully autonomous in its own house. It can be gained only by the young Polish proletariat, and in its hands it is secure. For the workers of all the rest of Europe need the independence of Poland just as much as the Polish workers themselves.” (F. Engels, London, February 10th 1892)

A partly uncut copy, preserved in its contemporary wrappers, as issued.

Our searches in the international public institutions have allowed us to locate only one copy: Hoover Institute of War, California, (USA).

“The personality and history of Marcel Bekus deserve attention. Present in Russia in 1905, close to the Anarchists, he goes to Spain during the civil war and dies there in 1938. Some fifty years later, his grandson opens his cellar and finds numerous brochures and posters perfectly preserved.” (Matériaux pour l’histoire de notre temps, Année 1991, XXIV, N°24, pp.29-30)

Marcel Bekus (1888-1939) rallies the Revolution in 1905, in Russia, and is then deported to Siberia. Once freed, he develops an interest in the French Revolution and in the Russian one of 1917.

In 1919, he arrives in Paris and continues to frequent revolutionary circles.