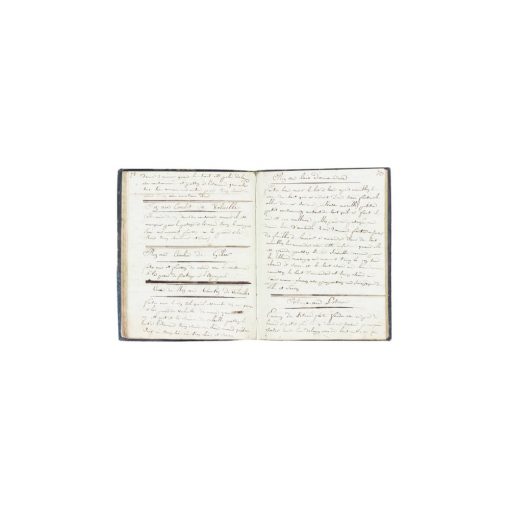 An emotional original and unpublished manuscript by Legras le jeune,
the cook of Campochiaro,
ambassador to the king of the Two-Sicilies in Paris.

It comprises of 220 recipes
whose names announce the congress of Vienna (1814-1815) :
The Double Spanish, White and Blonde Italian, The German, The Dutch…

Time has not been kind to most old cooking manuscripts, which are now considered quite rare.

An unpublished and original testimony on the lavish rebirth of French gastronomy under the Premier Empire, written by Laquipiere’s entourage. Laguipiere was the master of Antonin Careme who ended his career in the service of the king of Naples, Joachim Murat.

This collection proposes 220 recipes as well as lists of dishes that can compose different menus.

There are recipes for sauces, the different cooking times of meats, fish, soups and desserts.

According to the Almanach impérial of 1811, the ambassador to the king of the Two-Sicilies in Paris was the duke de Campochiaro.

An advisor and minister under Joseph Bonaparte, ambassador in Paris and Munich, minister to king Joachim in 1814, Campochiaro was born in Naples.

Very early on, he showed some inclination towards literature. He embraced the principles of the French revolution which earned him terrible persecution, especially during the 1799 proscriptions. When the French arrived in Naples in 1806, he was one of the numerous Neapolitan lords to offer his services to king Joachim, and he was appointed as an advisor to the prince and minister de casa reale. When his ministry was cancelled, the duke de Campochiaro was sent to the embassy in Paris and received the star of the Legion of honor. He later went to Munich and participated at the 1814 congress of Vienna. (P. L. P. de Jullian, galerie historique des contemporaines, III, p.131)

It was at the time the heart of the diplomatic, festive and gastronomic heart of Paris.

Campochiaro was a plenipotentiary speaker at the congress of Vienna that began in 1814.

In his book titled Talleyrand et la Société européenne, Frédéric Loliée recalls the atmosphere of the congress of Vienna.

“Some times, the political controversies garnered no attention. Topics less important than deciding whether the throne of Naples would be taken or left to the prince Murât had been broached. Simply put, there were many discussions on details of gastronomy. And because national pride never gives up its rights, every diplomat had praised the subtlety and deliciousness of his own national dishes. When the conversation moved to cheese, lord Castlereagh naturally praised England’s stilton ; Alvini, the strachino of Milan; Zeltner, the lovely product from the Emmenthal region ; the baron de Falk, the Dutch minister, had insisted on the excellence of the limburg, immortalized by Peter the Great, who never ate any without first measuring it with a compass. No one, during this important debate, thought to give in to his neighbor’s opinion. The prince de Talleyrand kept silent. He didn’t have his weapons on him.” (F. Loliée, Talleyrand et la société européenne)

“From the 14th to the 19th century, recipes all have historic value. They are a symbol of our culinary heritage, they characterize French cuisine in its diversity and over a long period of time. It is an entire part of our history that is revealed in these emblematic dishes. Some have been forgotten ; others, however, have endured over time. These recipes make up the itinerary of a trip among the mythical dishes that characterize French cuisine.” (Patrick Rambourg)

A moving, original and unpublished manuscript by Legras, the cook of Campochiaro, ambassador to the king of the Two-Sicilies in Paris in 1810.