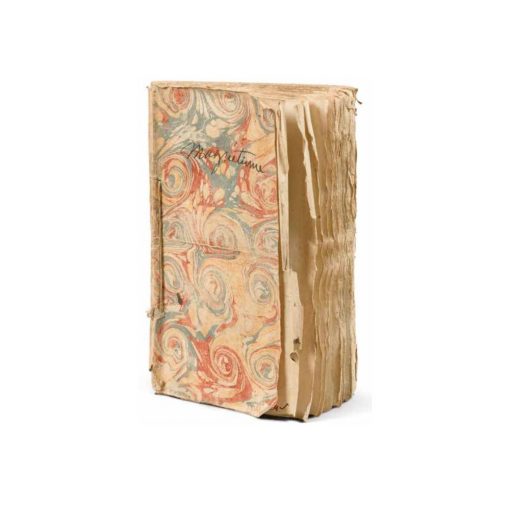 First edition of Mesmer’s “Manifest”,
the ancestor of psychotherapy.

A copy with very wide margins, entirely untrimmed,
preserved in its contemporary temporary wrappers, as issued.

First edition of Messmer’s founding text, the ancestor of psychotherapy.

“The manifesto of animal magnetism… as much a social movement as a medical practice, mesmerism spread quickly throughout Europe and America. His discovery led to the large-scale investigation of psychological phenomena, and is thus an ancestor of psychopathology and psychotherapy.” (Norman)

“First edition of the Manifesto of Mesmerism: presented to the French as a “natural” medicine at a time when the cult of nature and the popular enthusiasm for science had reached a peak. Numerous Parisians fell into “crisis” at the touch of Mesmer’s hand and recovered with a new sense of being at harmony with the world. His followers, the mesmerists, published numerous case histories documenting their claims. “They produced an enormous barrage of propaganda: at least 200 books and pamphlets, more than were written on any other single subject during the decade before the opening phase of the Revolution in 1787.” (DSB)

“Since the days of primitive and magic medicines, curative properties had been attributed to the laying on of hands. Mesmer practiced a similar method. He maintained that a magnetic fluid pervades the universe, exists in every living being, and affects the nervous system. Experimenting with the use of this “magnetism” he found that there was a healing magnetic power in his own hands and that he could obtain results in treating nervous disorders without a magnet, a faculty he called “animal magnetism”. Mesmer induced sleep and did, in fact, use hypnotic power. Mesmer went to Paris, was patronized by the King and the Queen and corresponded with George Washington. Fantastic scenes took place in his magnificent consulting rooms, where patients sat round a special tub, while Mesmer appeared, clad in lilac silk, waving an iron wand: perfume, theatrical costumes and dramatic illumination were all part of the treatment.

Louis XVI set up a committee, with Benjamin Franklin as chairman, and Lavoisier, Guillotin and Bailly as some of the members, to investigate “animal magnetism”. Their report condemned “mesmerism” medically; but the idea had taken hold and spread all over Europe. Mesmer was undoubtedly sincere, despite his theatrics but he never realized the implications of his discovery and methods.

Mesmer became a pioneer of psychotherapy.

Since his time the investigation of how to release subconscious states through auto-and hetero-suggestion has continued, and the whole field of extra-sensory perception and spiritualism has affinity with Mesmerism” (PMM)

In this Memoire written to ensure the “triumph of truth”, Mesmer exposes the doctrine of his new “science”.

The first part exposes the doctrine. According to the author, there exists in nature a universal active principle that has a mutual influence on celestial bodies, the earth and animate bodies. Mesmer calls “animal magnetism” the property present in all living bodies that makes them susceptible to this cosmic influence, which travels everywhere in a to and fro movement, like the tides. Knowing how to master this fluid, direct it by hand or with the eyes towards the sick enables to cure all diseases. Mesmer claimed to have discovered one of nature’s secrets and was putting it in the service of men. It is this secret that the 27 proposals at the end of this book are supposed to divulge.

In Mesmerism theory, the therapist, being a total, living man, acquires a central importance in his relationship to the patient, with whom he tries to be in harmony and towards whom he orients the fluids. The Mesmerism theory, while manifesting the will of being completely transparent, which links it to the Enlightenment, remains steeped in hermetic tradition. The affirmation that an “internal sense is in relation to the whole of the universe” will have a considerable impact on the Romantics.

“This Memoir enables us to grasp the different aspects of this revolutionary practice which will have enormous consequences in the next centuries. From provoked sleepwalking to hypnosis and psychoanalysis, from the contemporary experience of dynamic psychiatry to the discovery of the subconscious and the healing through the mind, they all find their origins in the authoritarian boldness and clumsy intuitions of the precursor Mesmer.” (J. P. Peter)

A copy with wide margins, entirely untrimmed, preserved in its contemporary temporary wrappers, as issued, a most sought-after condition.