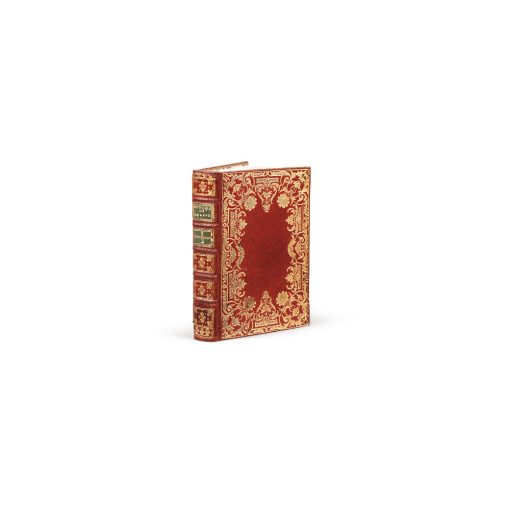 A copy covered during the revolutionary period
in a remarkable testimonial binding
in contemporary red morocco.

An apparently unique copy of this illustrious autobiographical, literary and revolutionary first edition, complete of its four parts.

“The remarkable pieces that make up these Memoires, written by Madame Roland during the captivity that preceded her death, were secretly entrusted by her to the naturalist Bosc, who buried them inside a rock in the forest of Montmorency, until the storm that had taken away his Girondins friends had calmed down.

This famous collection was made up of memoirs of the author’s private life, the history of both of Roland’s ministries, some historical notes and, finally, some portraits and anecdotes.” (P. Larousse)

Successively a Jansenist, a Cartesian and a deist, as she herself claimed, Madame Roland was above all mostly impressed by the works of Voltaire, Jean-Jacques Rousseau, Diderot and the other great writers of the 18th century.

Riouffe, in his Mémoires d’un détenu, thus traces the portrait of Mme Roland when she was brought to the Conciergerie :

“She wasn’t in her prime but was still full of charm; she was tall and of elegant stature. Her physiognomy was very spiritual. She had a republican soul in a body shaped by grace and a certain courtly politeness. Compared to what one usually sees in the eyes of a woman, her black eyes were full of expression and softness.”

Mme Roland had never ceased to interest herself in philosophical ideas and the advent of freedom.

Four times a week, the Roland reunited in their home the most important politicians who soon would compose the parti girondin, the Brissots, the Pétions, the Buzots, the Condorcets, the Barbaroux, etc. All of these distinguished men were fascinated by Mme Roland’s rationale, by the clarity of her judgement, by the strength of her convictions, the spread of her knowledge, and also maybe by the infinite charm of her conversation, her spirit, her graces and her beauty. It all resulted into something somewhat risqué: a great political party whose real head was a woman.

When the Gironde imposed upon the king the creation of the ministère dit patriote and was called in to play a part in it, Mme Roland’s role grew. She was the one who wrote the famous instructions, memorandums and other documents, and notably the famous letter to the king of the 10th of June 1792. What appears certain is that she continued to push the party of which she was the muse in its incessant war against the Montagne and the Paris commune, a war which ended up being quite fatal to the Girondins and to the Revolution. Her hatred of Danton and Robespierre made her refuse any tentative transactions, and it seems it was she who convinced Louvet, the angry and frivolous author of Faublas, to write up his famous act of accusation against Robespierre.

Mme Roland, as we know, was wrapped up in the Girondins’ fall. When an arrest warrant against Roland was issued on 31 May 1793, she showed up in front of the Convention to contest this measure but was not admitted to the bar. That same night, she was arrested, imprisoned in the abbey and released on June 23rd, and then arrested the next day and imprisoned at Sainte-Pélagie. It is during her captivity that she wrote in haste the pieces that make up these admirable memoirs, which she secretly managed to pass onto the noble and faithful Bosc, who saved them by hiding them in the nook of a rock in the Montmorency forest. Transferred to the Conciergerie on October 31st, she appeared in front of the Revolutionary court on November 8th “as an accomplice of the plot against the unity and indivisibility of the republic, its freedom and the safety of the French people.”

Mme Roland defended herself with vehement energy. She was condemned to death. The general opinion was so against the Girondins that the illustrious woman who was considered their guide and inspiration seemed fatally fated for sacrifice.

Following Louvet, Mme Roland welcomed the sentence with these words: “You have judged me worthy of sharing the destiny of the great men you have murdered. I will try to take to the scaffold the courage that they showed.”

Among all those magnanimous deaths whose memories the annals of the Revolution have preserved, the one of this noble woman is, in effect, one of the most sublime. Wearing a white dress, standing up on the cart, so calm despite the crowd’s clamors, she consoled with heroic heartiness another condemned man who was to become her companion in death and was quite shaken. She seemed to be a true heroine of Corneille. In front of the scaffold, she saluted the gigantic statue of liberty that stood on the pedestal of the now removed statue of Louis XV and said these now historical words: “O liberté ! que de crimes on commet en ton nom !”

Mme Roland has remained one of the great figures of modern France and her tragic destiny will always awaken enthusiasm and pity, much like her talents and her personality will forever excite admiration.

An exceptional and superb copy, bound at the time, in 1795, in a virgin binding destined for the royal almanac and on which were applied some quite remarkable doublures and endpapers from the revolutionary period and lettering pieces in contemporary green morocco made especially for this copy.