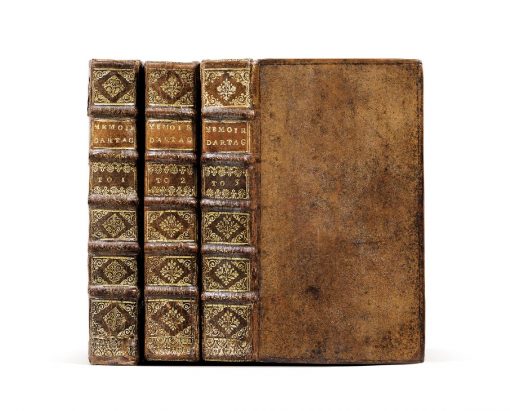 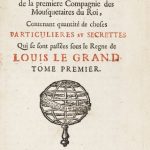 Rare first edition of the Mémoires de D’Artagnan,
a direct source for The Three Musketeers.

Rare first edition of the Mémoires de D’Artagnan, a direct source for The Three Musketeers.

“Mr Alexandre Dumas advantageously drew on the book written by Courtilz de Sandra for his novel entitled The Three Musketeers. The names of Athos, Portos and Aramis, and picturesque names they are, are explicitly written; the duels, D’Artagnan’s romances and his adventures with Milady are here fully narrated.” (Querard)

“One must consider the Mémoires de D’Artagnan as a prefiguration of the realistic novel because Courtilz de Sandras only gave them the appearance of historical truth to better captivate his readers. In the preface, the author pretends drawing on D’Artagnan’s papers for the material for his novel.” (Dictionnaire des auteurs, I, 699)

“Three writers contributed to the The Musketeers: Gatien de Courtilz for the script and the intrigue; Maquet, for the makeshift writing, the draft and, in a way, the model; Alexandre Dumas in bringing the narrative to life, for the dialogues, the color, the style.” (Henri d’Alméras)

In the Mémoires de Mr de D’Artagnan, the myth of the poor gentleman who plays an important role in the social order perceived as unchanging is elaborated.

“The fierceness of his quail earned him twelve years in the Bastille.” (Quérard)

He delivers in his writings a colorful portrayal of the end of the great century, rich in anecdotes and scandals. The author wrote this book in the Bastille where he is said to have met D’Artagnan. Censured and seized books were deposited in his “hell”, which was later to become the “most beautiful library, meticulously inventoried, of the kingdom’s forbidden books”. (Portier des Chartreux)

Often reedited despite having been seized and banned, this text expands on the real life of Charles de Batz-Castelmore, comte d’Artagnan (1600-1673), musketeer in the service of Mazarin.

The author had previously written a Political Testament in which he openly criticized Louis XIV’s absolutism.

The Mémoires de D’Artagnan gives the author a new opportunity to criticize the regime. The present text was quickly reedited, most of the copies of this first edition are made up of volumes from different printings dating from 1700, 1701 and 1702.

The present copy comprises of three volumes dating back to 1700 and does constitute the first edition of this text.