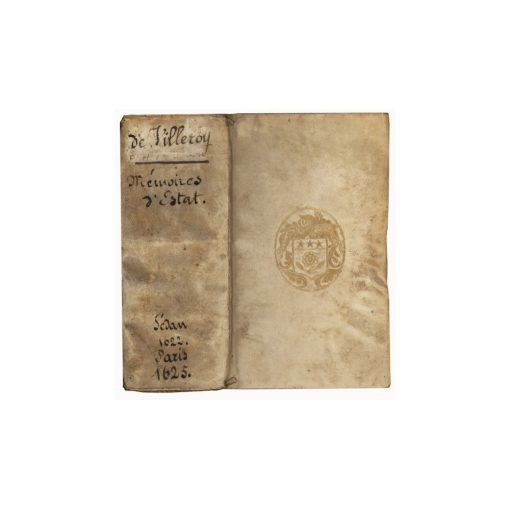 A precious and extremely rare copy of
Villeroy’s Mémoires d’Estat,
bound in contemporary vellum with the arms of the Savignacs.

Collective edition of the first two parts of Villeroy’s Mémoires d’Estat de Villeroy. A third and fourth part were published in 1623 and 1626.

The first three parts were reprinted in 1665, and then by Trevoux in 1729, “but the first editions are preferred.”

They will be reprinted again in the “Collection des mémoires relatifs à l’histoire de France”, and then in the Petitot collection.

“Nicolas de Neufville, lord of Villeroi (1542-1617) was considered, at the age of 18, an able politician; and the queen Catherine of Medici, of whom he had gained the trust, employed him for two important negotiations, in Spain and in Italy. Having married the daughter of l’Aubespine, he succeeded him soon after (1567), as secrétaire d’État. Without losing his credit with the queen mother, he gained Charles IX’s benevolence and often took part in his personal affairs. We know that the prince dictated his Traité de la chasse, printed in 1625, and his Épître à Ronsard to Villeroi.

… Charged by the duke de Mayenne of entering negotiations with Henri IV, he had several meetings with the prince. Villeroi did not hide his reservations against the Protestants, whom he accused of being the true authors of the Ligue. As soon as Henri IV abjured his faith, Villeroi hurried to recognize him as the legitimate sovereign. He was, in 1594, reestablished as secrétaire d’État.”

After Henri IV’s death, Villeroi managed to keep his charge and he benefited from his influence over Marie de Medici to push her to adopt an alliance with Spain, which Sully had fought against for so long because it seemed to him to be contrary to the interests of France.”

The political longevity of this politician who took part in the government of France under Catherine de Medici, Charles IX, Henri III, Henri IV and Louis XIII allows us to consider these “Mémoires” as one the most interesting the 16th century has to offer.

A superb copy, with wide margins, preserved in its contemporary ivory vellum with the arms of the Savignac family, a family which gave several magistrates to the Cour des Aides of Montauban.