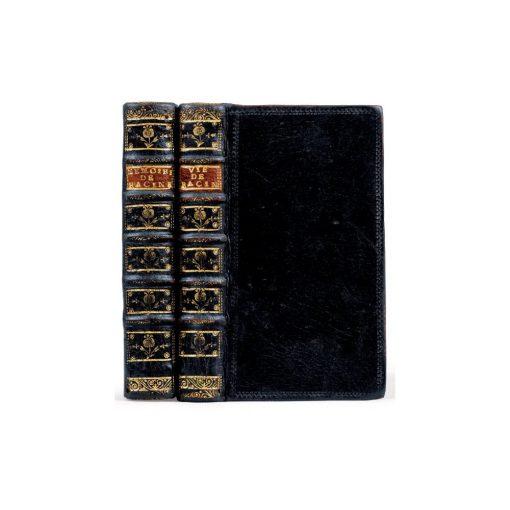 The first editions of Jean Racine
bound in contemporary black morocco
are among the bibliophilic rarities.

The second volume revolves entirely around the first edition of Racine’s intimate correspondence, from the letters of his youth, not much influenced by the rigor of Port Royal, to the ones of his maturity where we find his letters exchanged with Madame de Maintenon and Boileau.

“The first part contains the Discours given by Racine at the Académie française for the arrival of the abbot Colbert, the outline of act I of Iphigénie en Tauride, the Extrait du Traité de Lucien, some historical fragments, some reflections on the Ecriture Sainte, some Hymnes du bréviaire romain and the texts attributed to Jean Racine.

These Memoires give the most interesting and often unpublished details on the origin of the Racine family, on the beginnings of his friendship with Boileau, on his relationships with Molière and Corneille and on the reception of his different plays.

After the Mémoires come the Discours prononcé à l’Académie Française pour la réception de l’abbé Colbert le 30 octobre 1678 where Racine, after having underlined the personal merits of the recipient in science and religion, vividly praised the king, the protector of the Académie, and the Colbert family, whose members held the most enviable posts in the State.

After the Discours is the outline of act I of Iphigénie. According to Louis Racine it is the only poetic fragment found in his father’s papers.

The Extrait de Lucien is a true thesis on the art of the historian and the ways of writing history. Racine probably wrote it as an inspiration when he was appointed historiographer of the king.

The fragments historiques are notes written by Racine, thrown on paper “without style or order”. They are presented as they were, and no one really knows what they were for.

The Réflexions pieuses sur quelques passages de l’Ecriture Sainte give us an idea of Racine’s moral and religious preoccupations.” (Guibert)

Written by his son Louis Racine, the life of Racine was a real success because it served as the principal source for all the biographies written after.

“His Mémoires are not only a work of filial piety. It contains numerous information on Boileau, on the tastes of the times, narrow and conventional. The anecdotes are funny and lively. Mostly, the comments on each play reveal the essential aspects of the drying grammatical purism that reigned till the end of the 18th century.” (Grente)

A savant and refined amateur, with a passion for astronomy, painting and architecture, the abbot de Sapte was one of the most active members and the perpetual secretary of the Académie royale des Sciences, Inscriptions et Belles-Lettres de Toulouse instated by Louis XV in 1746.

In this regard, he supervised Louis Racine’s admission to said Académie in 1750 on the insistent recommendations of the marquis de Pompignan.

The first Racine editions in this condition disappeared from the market a long time ago.