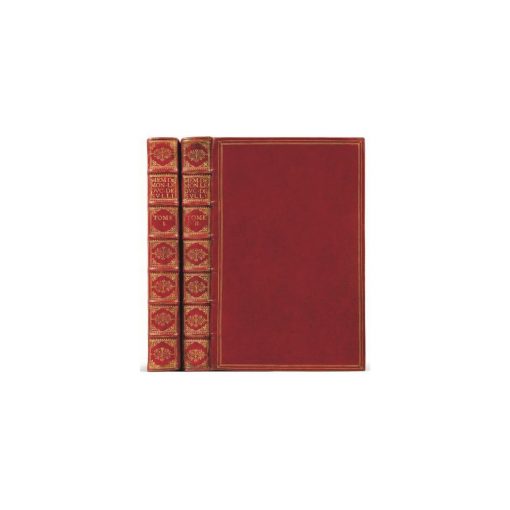 First edition of Sully’s Mémoires,
clandestinely printed on the private presses of the
château de Sully
and preserved in its contemporary
Parisian morocco binding.

First very rare edition clandestinely printed on the presses of the château de Sully by a printer from Angers.

A protestant, friend, confident and advisor to the young Henri de Navarre, Sully played an important part in the conversion of the prince. At the start of his reign, Henri IV does not hesitate to call him to Paris and successively charges him with the most important jobs, like secrétaire d’état in 1594 and surintendant des finances in 1599. He was aware or supervised all of the affairs of the kingdom; he is the one who led the negotiations that would result in the king’s marriage to Marie de Medici. Very affected by the king’s death, Sully stayed in post in 1610 but palace intrigues soon brought about his resignation.

It is in his castle of Sully-sur-Loire, acquired in 1602, that at the beginning of his disgrace, in 1611, and up to 1617, Sully dictated to his secretaries his “Sages et royales oeconomies d’Estat…”.

This handwritten version was profoundly reviewed and rewritten by Sully himself in Sully in 1638 when the text was clandestinely printed.

Fearing Richelieu’s reaction and wanting to be discreet, Sully had a printer from Angers come and print his memoirs in 1638 in his castle and under his supervision.

This edition, the true first edition of Sully’s Mémoires, includes the parallel between Caesar and Henri the great on pages 605 à 629 of the first volume.

The first part narrates the events of 1570, the peace that led to the Saint-Barthélemy massacre, and up to the beginning of 1601 and the king’s marriage to Marie de Medici. The second exposes the events up to the year 1605.

“In 1638, Sully published in his Mémoires des sages et royales Oeconomies d’Estat his “grand design” of a European peace that he attributed to the king of France Henri IV. As opposed to Grotius’ De jure belli ac pacis, the project doesn’t fit into a general theory on law. His objective is fundamentally political: the author wants to rethink the territorial statute of Europe; Sully is not a man of ideals and dreams. On the contrary, his project abounds with scheming realism and a will to power that recalls Machiavelli. One century before, Machiavelli had advocated the national unification of Italy so that it could be powerful, could be free from the dissensions that plagued it and free from the foreign “Barbarians”. Likewise, Sully presents a plan for a European union with the idea that France would thus acquire a predominant position that would give it power over the others.” (S. Goyard-Fabre, La construction de la paix ou le travail de Sisysphe)

This ensemble of texts in which Sully gives himself a pivotal role in Henri IV’s reign presents a high historical value and gives us extremely precious details on Henri IV’s history and Sully’s, revealing his true personality.

A precious copy preserved in its beautiful contemporary Parisian binding in red morocco with an elaborately decorated spine.

It bears some handwritten annotations that amend the text.