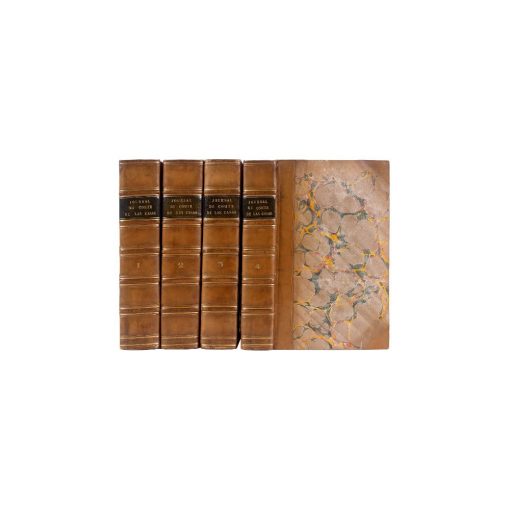 A “very rare” (Clouzot) first edition of the Mémorial de Sainte-Hélène,
“These Memoirs are of the utmost interest,

to be sought in contemporary binding.” (Carteret)

A beautiful copy in contemporary binding,
including an autographed letter signed by Montchénu.

First edition of the Mémorial de Sainte-Hélène, “Memoirs of the utmost interest, universally renowned and appreciated, to be sought in contemporary binding” (Carteret) jointly published with the one from Paris but a lot more rare and sought-after.

It is decorated with three folding plates representing the isle of Saint-Helen, the path taken by Longwood and the Italian campaign and an engraving representing the house where the emperor was born.

Upon publication, the Mémorial was an immense success and had a considerable political influence.

“After the death of Napoleon and based on the accounts by Las Cases, we began to think of Napoleon as a democrat, a liberal, the son of the revolution he was painting, as requested by his master. It is partly out of the Mémorial that was born this renaissance of the Napoleonian sentiment, that would reach its peak in the Retour des Cendres and find its epilogue in the arrival of Napoléon III to power. But the Mémorial did not only provoke a political movement. It influenced the birth of works of literature of extreme importance. It is after reading the Mémorial that Goethe had the idea of his conversations with Eckerman.” (Dictionnaire des Œuvres)

“The Hundred Days came and Las Cases was appointed as an advisor to the State while, at the same time, taking up his previous post as chambellan of the Tuileries. The Waterloo disaster having once again upset Napoleon’s plans, he remained faithful to misery : in service at the Malmaison when the Emperor took the resolution to leave France and go seek calm and refuge in the United-States, he immediately offered to share with him this voluntary exile and considered a supreme favor the fact that he was facing the same dangers as the former master of the world (…). Las Cases also considered it an honor to accompany the emperor to Sainte-Helena : here, the emperor dictated him his memoirs, shared with him stories about the great moments of his reign. Every evening, before going to sleep, Las Cases wrote down these daily conversations, a precaution for which we are grateful because historians who want to study the events of the Consulat and Empire now have a precious source. Make no mistake, here is a man who managed like no other to share with us the intimate thoughts of the modern Charlemagne.” (W. Duckett)

“To those who wonder what was Napoleon’s greatest victory: Rivoli, Austerlitz or Wagram ? should we not answer Saint-Helena ? Vanquished, defeated, muddied by hundreds of pamphlets and leaving for posterity the image of a new Attila in 1815, Napoleon managed to alter — an exceptional case in history — his reputation through a book, this “Mémorial”, that recalled his past glory and the misery of Saint-Helena. In the “Mémorial”, Napoleon made himself a champion of liberal and national ideas, a martyr of the Saint Alliance. The Mémorial is a masterpiece of literature and political propaganda.” (Jean Tulard)

Montchénu was charged with watching Napoleon in Saint-Helena. In this letter, Montchénu recalls Napoleon’s interest with what was happening in Europe. “He preoccupies himself with France and a little bit with Europe and because he still hopes to have a throne at his disposal he followed the events in Spain with some concern.”

Provenance : Library of Henry Goulburn Esq., with ex-libris on endpaper.