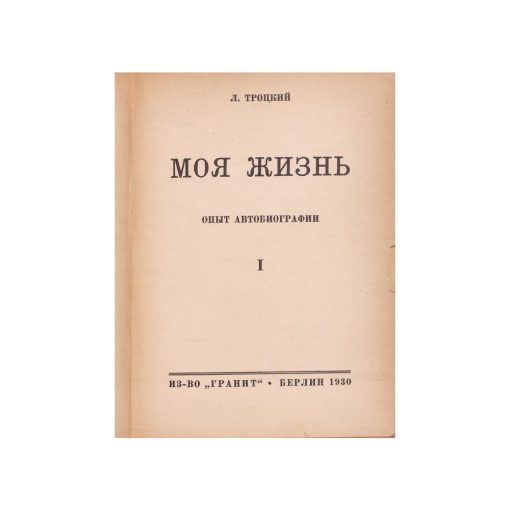 Rare first edition of Trotsky’s autobiography, a veritable anthology of the soviet communist doctrine, published for the first time during the author’s first year in exile.

“The author wrote this book in Turkey, on the island of Prinkipo in 1929, after his expulsion from the USSR. Trotsky was a politician, an incredible orator but, above all, a social journalist. Trotsky’s unordinary life unspools before our eyes in all its colorful and troubled ways. Written during his struggle for survival, this book is, above all else, a weapon.” (Dictionnaire des Œuvres)

The text describes the author’s childhood, the revolutions of 1905 and 1917, the Russian civil war, the break between Trotsky and Stalin and Trotsky’s expulsion from the communist party.

“Trotsky (born Lev Davidovitch Bronstein,) was born in Ianovka (Ukraine) in 1879. Returned to Petrograd after long years of exile, he was elected to the central Bolshevik committee in July 1917 and played an important part in the October Revolution. Commissioner of the people for foreign affairs in the first soviet government, he negotiated with Germany the peace of Brest-Litovsk on March 3rd 1918 and then resigned. During the civil war, between 1918 and 1920, he was the commissioner of war: he created the red army and was the artisan of the victory of the Soviets. As early as 1923 he had to deal with the hostility, inside the Politburo, of the Stalin-Zinoviev-Kamenev Troika, who were opposed to his economic dictatorship policy. After Lenin’s death in January 1924, he was relieved of his functions as commissioner of war in January 1925. Violently opposed to Stalin, whose authoritarianism was increasing, he was expelled from the communist party in December 1927 and from Soviet territory in February 1929. He found refuge in Constantinople, in France, in Norway and then in Mexico. He never ceased to fight against Stalinism, defending his idea of a “permanent revolution”. In 1938, he founded the IVth International that regrouped only Trotskyists and Leninist-Bolsheviks. He was deathly wounded in Mexico, probably by an agent of Stalin, on August 20th 1940.

“The only Bolshevik leader to write his memoirs, Trotsky published his remarkable book in 1930.” (J Hansen)

“Trostky’s work “my life” must hold pride and place as a work of remarkable self-analysis as well as imaginative history. Though he wrote it at the relatively early age of forty-eight, his life up to then had been eventful enough to merit recording.” (Volkogonov)

Trotsky’s writings were banned from publication in the Soviet Union until 1989.

A precious copy of this rare first edition preserved in its contemporary orange glazed calico binding.