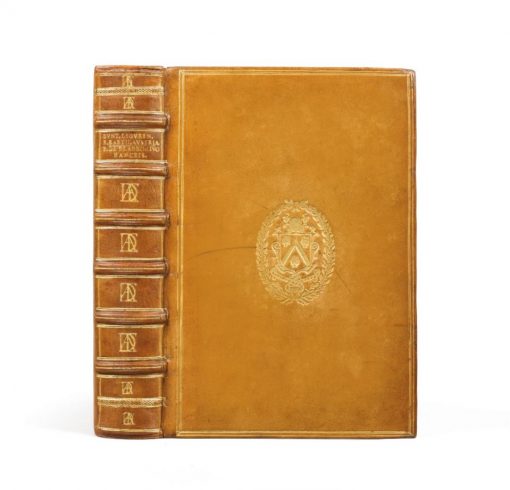 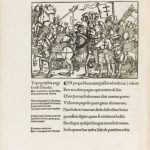 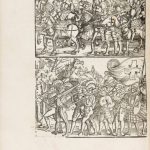 One of the precious volumes
purposely printed on “magnificent paper
especially made for Jacques-Auguste de Thou”
.

Princeps edition and first print of this remarkable epic poem celebrating the battle of Nancy with a privilege dated September 4th 1518. The “Nanceidios opus de bello nanceiano” constitutes one of the most beautiful and rare volumes bound for J.A. de Thou.

Brunet twice uses the term “beautiful” to describe this book: “We generally consider this beautiful volume as being the first to be printed in St Nicolas du Port”, and, later, “This historical poem from P. de Blarru is printed in beautiful round letter and decorated with woodcuts.”

This book is often mentioned as being the first to be printed in Lorraine and, in all certainty, one of the first in St Nicolas du Port. In the 19th century, it was already considered a rarity.

It is remarkable for its beautiful round letters by P. Jacobi and for its marvelous illustrations consisting, aside from the title representing René de Lorraine on his horse, of 36 woodcuts (140 x 95 mm), some repeated, depicting the war of 1475-77 which opposed René de Lorraine to Charles le Téméraire, duke of Burgundy.

The magnificently crafted woods are attributed to Gabriel Salmon ; we know that this artist worked on Pellerin’s 1505 treaty on perspectives also printed by P. Jacobi ; furthermore, a document from 1514-1515 describes G. Salmon as an artist employed by the duke de Lorraine.

All the images represent battles scenes : the siege of a city with canons, a fight on the river, the attackers’ camp, troupes marching, a burning camp, the funeral of Charles le Téméraire…

The soldiers are recognizable because they either bear the white or black cross of Burgundy on the croix de Lorraine, the emblem of the duchy.

The book, dedicated to Antoine, duke de Lorraine, bears his coat of arms, engraved on wood, at the top of the privilege on the verso of the title page. (Davies, Devices of the early printers, 46)

Pierre de Blarru (1437-1505) spent his whole life working on his poem, “La Nancéïde”, which was only published in 1518 thanks to a friend of the author’s: Jean Basin de Sandaucourt who handled the editorial work and wrote the marginal notes and the table of contents in verse.

The author seems to have based his book on the memoirs of René de Lorraine that he dictated to Chrétien, his secretary.

The book, to which Picot dedicates 5 pages in the catalogue of the Bibliothèque Rothschild, tells the story René, duke de Lorraine, who managed to take back the states invaded by the duke of Burgundy. The defeat and death of Charles le Téméraire under the walls of Nancy orient the narrative, in which the Swiss play a large part.

Blaru’s favorite pastime is discernible in the text as it is full of comparisons taken from bird husbandry. Charles le Téméraire is described as a “peacock”, a “rooster who has lost his feathers” and a “bird caught in birdlime”.

Barru’s contemporaries were so mesmerized by this epic poem that they compared it to Virgil’s Eneid and later equated the author with Homer.

Precious and marvelous copy, especially printed on large paper for J. A. de Thou, measuring 30 mm more than the calf copy restored by Gaspard Fieubet de Naulac and sold 10 000 € 30 years ago (Paris, juin 1986).

II.A.     Gonthier “Guntheri. Poetae clarissimi Ligurinus” (Strasbourg, 1531), one of Gonthier’s major work, one of the best poets of the 13th century, born in Germany.

After having taught literature, he entered the order of Citeaux, and retired in the monastery of Pairis or Paris (Parisiense), in the diocese of Basle, where he died on March 11th 1223. His main work is a poem in hexameter verse titled Ligurinus, sive de rebus a Friderico I gestis ; it is divided in ten books and tells the story of Frederic’s victories over the people of the Milanais.

Vossius, Juste-Lipse and Casaubon praise its style, closer to the Ancient’s purity than the barbarism of the era it was written in. This book is also esteemed for the accuracy of its facts. The author only talks of events which he was told about by first-hand witnesses. Conrad Celtes, having discovered a copy of this poem in the monastery of Eberack, in the Balck Forest, sent it to Conrad Peutinger, who published it in Augsburg, in 1507, in folio. Jacques Spigel de Schelestadt worked on a new edition with notes, after the Austriados of Rich. Bartholin, Strasbourg, 1531, in folio. This is the present book.

Richard Bartolini was a Latin poet born in Perugia in the 15th century. He chose a life in the church and was given the head of the chapter of Spolette. He later became the cardinal de Gurck’s chaplain and then archbishop of Salzburg. He escorted the cardinal in Germany and showed how grateful he was for his kindness by defending him several times in his writings. In recognition of his talents, the emperor Maximilian gave him the poetic laurel. He is a good poet : in his poem de Bello norico, where he describes the wars that the house of Austria had to fight against the dukes of Bavaria and the Palatin counts, he inserts all of the pagan divinities and mixes Apollo, Diana, Mercury with the popes, the electors and the Emperor. François Pic de la Mirandole, to whom he had shown the poem, gave him a hard time about this.

Precious volume reuniting two rare editions specially printed on large paper and bound in contemporary citron morocco for Jacques-Auguste de Thou, born in Paris on October 8th, 1553, and who died on May 7th, 1617. He was the son of Christophe, first president of the Parliament of Paris, and of Jacqueline Tuleu de Céli.

His book collection, traditionally called the Bibliotheca Thuana, was without a doubt one of the most important private collections of the world. The fact that we know about it today is proof of its celebrity.

Its reputation is not so much due to the number of volumes and their engravings but more to the exquisite choices of texts, where the scholar, collector and savant completely reveals himself.

De Thou perfectly embodies the idea of the bibliophile.

No book in France or abroad got printed without him asking for two or three copies made just for him, on gorgeous paper.

The individuals best known for their knowledge, reputation and position in the world, like Peiresc, Henri Estienne, Isaac Casaubon, the pope Leon XI, the cardinal Barberini and many others from this century where great men were abundant, considered it all to be the most beautiful of its time.

All of the books bound on de Thou’s orders, mostly by Le Gascon, were dressed in full morocco, sometimes red, purple, green, citron. And they all bore his coat of arms on the covers and his cipher on the spine.

When J.A. de Thou died in 1617, the volume passed into the hands of François-Auguste de Thou, decapitated in Lyon with Cinq-Mars on the 12th of September 1642, and later that same year of Jacques-Auguste de Thou, baron de Meslay, François’ brother ; of Jacques-Auguste de Thou, abbott of Samer aux Bois and of Souillac in 1677 ; of Charron de Menars in 1680 ; of the bishop of Strasburg in 1706 ; of the prince of Soubise whose library was dispersed in 1788, of William Spencer Cavendish, 6th Duke of Devonshire, 1844 with ex-libris Chatsworth ; of John Roland Abbey (1894-1969) with ex-libris.

One of the most important works from J. A. de Thou’s library, beautifully preserved.