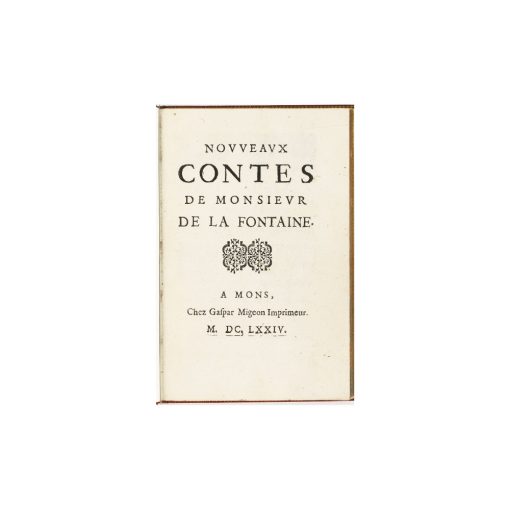 The rarest of all of La Fontaine’s first editions,
seized and banned by Louis XIV’s lieutenant de police,
printed surreptitiously in small numbers in 1674.

The rarest first edition of one of Jean de La Fontaine’s greatest work, seized and banned and printed surreptitiously in 1674.

“First edition, extremely rare and published clandestinely. La Fontaine was not able to obtain a privilege. It contains 17 tales (including Les Trocqueurs).” (Tchemerzine)

The very rare first edition of the fourth part of the Contes et nouvelles en vers, completely independent from the other tales previously published. Before this collective first edition, given in 1685, La Fontaine had published these poetical masterpieces over ten years : a first series in 1665 (two editions of 2 then 12 tales), a second in 1666 (13 tales), a third in 1671 (13 tales), and the present one of 1674 (17 tales), of which three were also published in 1667 in a collection reuniting several authors (Recueil contenant plusieurs discours livres et moraux). Furthermore, the tale “Les Trocqueurs”, which belongs to the fourth part, was published separately in 1672, and 7 others tales will be published later: 6 in 1685 in the Ouvrages de prose et de poésie by Maucroy and La Fontaine, and “Le quiproquo” in 1696 in the Œuvres posthumes.

A clandestine issue seized by order of La Reynie.

If La Fontaine had managed to obtain a privilege for the first three editions of the Contes, the much bolder aspect of the fourth made it simply impossible. The text was surreptitiously printed in Rouen with, on the title, the fictional address of the bookseller Gaspard Migeod in Mons (here spelled Migeon), who, after having allowed in 1667 his name to appear on the title of the Nouveau Testament de Port-Royal (actually printed by the Elseviers in Amsterdam), had despite himself seen his name appear on many other clandestine editions. The lieutenant de police de Paris Gabriel Nicolas de La Reynie ordered the book to be seized and then, on April 5th, 1675, forbid it from circulating on the grounds that “this small book is printed without privilege or permission, that it is filled with indiscreet and dishonest terms and reading it can have no other effect but to corrupt the soul and inspire wantonness”.

This new series of tales, the last published by La Fontaine, as a collection, contains 17 new tales :

These attributions are mistaken because we know that “le Grant Blason de faulses amours” is by brother Guillaume Alexis, the prior of Busy.

Under the title of Contes – La Fontaine was the great renovator of the French tale — is assembled all of Jean de La Fontaine’s libertine work.

“Never has a storyteller told a tale with as much ability, grace and good-heartedness. To his narrative style, La Fontaine adds a more familiar one, of casual conversation ; sometimes he lets his characters live and speak naturally and sometimes he entertains himself with their gestures and words, like an amused spectator, sneering and pitiful.

Some tales could be added to the Fables. They are enough for the La Fontaine from the “Contes” to be known, with his inimitable art, his language and his verses.”

One of the most beautiful copies to have appeared on the market in the last century.

With wide margins (height: 154 mm), its width is exceptional (width of the leafs is 102 mm) ; the famous “Lignerolles” copy sold in 1894 had shorter margins (151 mm high). The Mortimer Schiff copy measured 152 mm ; as for the Rochebilière copy, preserved in its contemporary binding, described by Claudin in 1930, it had a height identical to ours (154 mm).

A very beautiful copy in a Jansenist morocco binding with exquisite doublures.

Provenance : Robert Hoe (ex-libris n° 1962 from the sale catalogue of the first half of his collection, New York, 1911). An American businessman and press maker, Robert Hoe (1839-1909) belonged to the Société des amis des livres à Paris and cofounded the Grolier Club of which he was the first president. He assembled a very important collection of books and autographs.

Louis Barthou (vignette ex-libris, n° 496 from the sale catalogue of the second half of his collection, Paris, 1935). A French politician, who was a minister on several occasions, Louis Barthou (1862-1934) also distinguished himself by his love of music and literature. He wrote books on Lamartine, Baudelaire and Hugo, was elected to the Académie française and, a fervent bibliophile, assembled one of the most beautiful collections of his time.