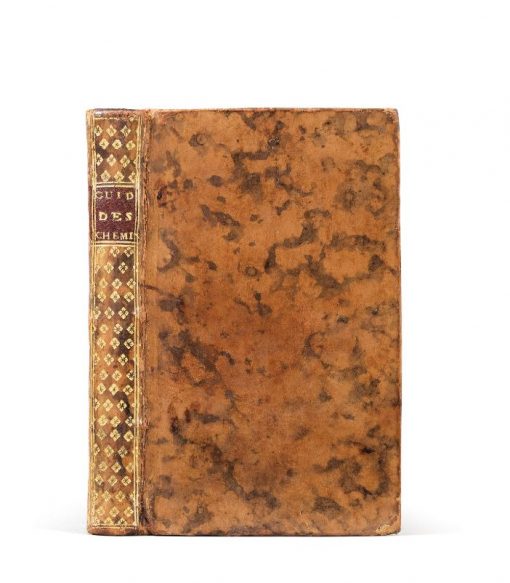 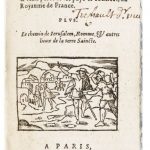 “The editions of the Guide are very rare today,

only some fifty copies have survived.

Rare edition of the “Guide des chemins de France”, the first road map first published in 1552 by Charles Estienne and describing 283 itineraries in the kingdom of France.

It is decorated with a pretty vignette on the title representing travelers.

“La Guide de Charles Estienne is the first commented road itinerary. It is the ancestor and model of all those published in the last four centuries.” (Bonnerot)

D’Estienne’s book is the first secular travel guide, conceived for the many merchants and businessmen but also for the less many humanists going from one printing center to another to correct the proofs of their works.

“The paths indicated by Estienne are for the most part the same that will be taken by the postal office and stagecoaches; they map out France, draw a mostly unchanged network that sets the destiny of the country. The Guide, ancestor of the modern guides like the Richard or the Joanne, is of precious historical value.” (Vignon)

Charles Estienne had come to realize that it was hard to get any information on the different stops of a journey when he had, in 1540, followed Lazare de Baïf, François Ier’s delegate, from Italy to the Haguenau conference. His friends had, at numerous times, wished for a small book that would indicate the towns where one could stop to eat and sleep. The project was innovative and impressive ; it meant collecting in the different regions the names of towns or villages that lined up the main roads, indicate the distances between them, the difficult passages, the faulty terrain, to give travelers an idea of the aspects of the landscape that they crossed but also to help them recognize it. It meant calculating the stops in order to write down the towns where one could have a meal and find shelter. Such a book demanded a clear and easy to read printout, a table listing the names of the towns to help guide the research, and a small format to make it easy to carry in one’s pocket.

No one more than Charles Estienne could undertake such a task : he already had, for his historical studies, read numerous books and collected notes on the principal regions of France, he had read travelogues and it was easy for him to extract from them precious indications on the different stops; finally he was also in constant relation with merchants who transported his books from town to town.

“More than a trave manual, this guide will reveal itself to be a real guide on the French provinces.” (En français dans le texte, N°50)

“This book is the ancestor of our guidebooks… what makes it most interesting is that it is anterior to most maps and geographical descriptions, and it even became the main source for geographers from the 17th and 18th centuries, even though they never mentioned it.” (L. Gallois)

The Guide would help cartography make great progress. Mercator himself acknowledged he owed a lot to the Guide.

Between 1552 and 1668 there were 28 different editions of the Guide. Despite their many printouts and forgeries, the books easily wore out in the pockets of the merchants along the roads of France of which they described the stops, and one can now hardly find any copies in the public libraries or private collections.

“The editions of the Guide are very rare today, only some fifty copies have survived, and only five from the first and second editions.” (Mireille Pastroureau)

Only 1 copy mentioned in the national and international public institutions : Wurttembergische Landesbibliothek, in Germany.