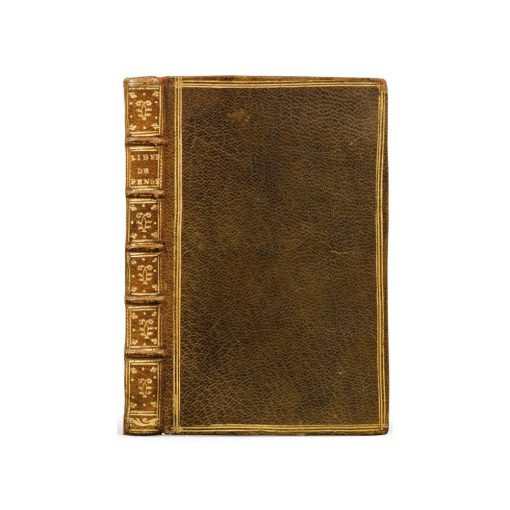 A very beautiful and precious copy,
preserved in its contemporary green morocco binding.

Extremely rare first edition reuniting five books on the philosophy of the Enlightenment and making up a “pré-holbachique” collection.

The Réflexions by Fontenelle on the arguments of Pascal and Locke, the Traité de la liberté by the same author, and le Philosophe du Marsais, were re-printed, under the care of Naigeon, in the “Dictionnaire de la philosophie ancienne et moderne”, which was a part of “l’Encyclopédie méthodique”.

All of these texts are here published for the first time and the ones by Fontenelle are described in Tchémerzine.

Often attributed to Holbach, Mirabeau’s text is mentioned in the bibliography of Vercruysse (pp. 23 et 44).

“This publication, a landmark in the history of the Enlightenment, though produced anonymously and announcing its place of publication as “Amsterdam”, actually appeared in Paris, edited seemingly by Du Marsais. Entitled Nouvelles Libertés de penser, it comprises five texts including Fontenelle’s Traité de la Liberté, which dates from the 1680s and is known to have been circulating in Paris by 1700, when copies were publicly condemned and burnt by order of the parlement, (…). Rare.”

The notice at the beginning of the book says : “We shall not hide that we tried to create something resembling the book on freedom of thought by Monsieur Colins, and even more so considering that these two texts are similar : because they suppose an examination and reflections that a man who is starting to think is able to have. These two books have the same objective, which is to not give a blind credibility to mysteries that we are unable to delve into.” “The author also examines here the opinions relative to the mortality and immortality of the soul, which brings him to compare man and animals. Man is not a better organized creature than an animal and is often not as strong or able. Spinoza’s ideas are relayed with some indulgence. D’Holbach will remember all of that while writing the Système de la Nature.” (Naville, p. 154)

“The philosophy of mind, now so wide-spread, owes its first developments to Fontenelle.” (Grimm)

A very beautiful copy bound in contemporary green morocco of one of the rarest collections reuniting 5 first editions on the philosophy of the Enlightenment.