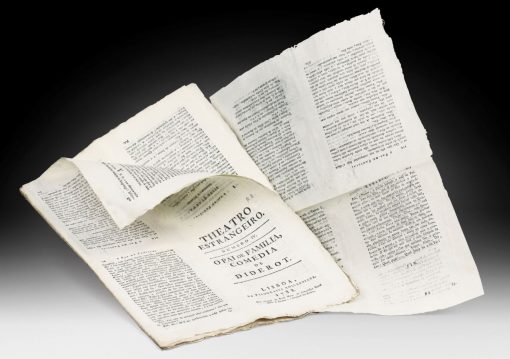 symbol of the import of the French Enlightenment
in Portugal in the 18th century.

A precious copy,
preserved as issued, in leafs.

Very rare Portuguese edition of Un Père de famille, the play inspired by the love of Diderot for his future wife, Mademoiselle Champion.

“Now a widow, with two children he loves, the father is still guilty of the worse offenses for having sacrificed everything to the prejudices of his world. Having agreed that his son Saint-Albin marry a poor but honest young lady named Sophie, he goes back on his word when he finds out this project is seen unfavorably by his son’s rich uncle. To keep said uncle’s heritage for Saint-Albin, he opposes he marriage, which he considers an ill marriage. Through cunning, he gets Sophie to renounce her love ; but Saint-Albin is determined to fight.

Like “Le Fils naturel”, this drama is an illustration of the author’s theories on theater ; this kind of bourgeois tragedy invented by Diderot himself seeks to represent men in their ordinary state and their normal feelings.”

“The 18th century marks the liberation of Portugal from Spain’s hold and the passage to a new cultural order oriented towards the importation of the Italian and French models.

The French book industry is starting to develop itself on national soil thanks to the arrival of several French booksellers and printers like Chardron, Bertrand, Rolland and Borel, and this leads to the blooming of a new ideological, esthetical and political sensibility based on the literature from the Enlightenment and to the rise of a few imprints dedicated to the spread of the biggest dramatic successes of the Parisian scene.

One of these first imprints, the Theatro Estrangeiro, launched by Rolland in support of the defense of morality and the reformation of the mores, finds its models in the translation of French tragedies and comedies and hopes to raise Portugal to the level of the most cultivated nations of Europe.

It shows how favorable the Portuguese public and artists were to the French comedies at the time.” (A. C. Santos, Réception de la comédie française au Portugal)

In the century of the Enlightenment, Molière, Beaumarchais and Diderot, among others, become in Portugal the first embodiments of comedic theater, susceptible of giving new orientations to the Portuguese comedic repertoire that sought to exist as far away as possible from the Spanish baroque comedy.

“In the 18th century, the power that France held over a part of Europe was linked to its freedom of opinion and theories of social reform. The French ideas were everywhere at the time. They are at the Academy in Berlin, at the court of Catherine, in the councils of Joseph II. They influence governments, they transform the spirit of societies. In Portugal, the marquis of Pombal has Voltaire and Diderot translated ; but, surrounded by enemies, he does not hesitate to muzzle the press.” (M. Villemain)

A precious copy preserved in its published state, in leafs, a very rare condition.