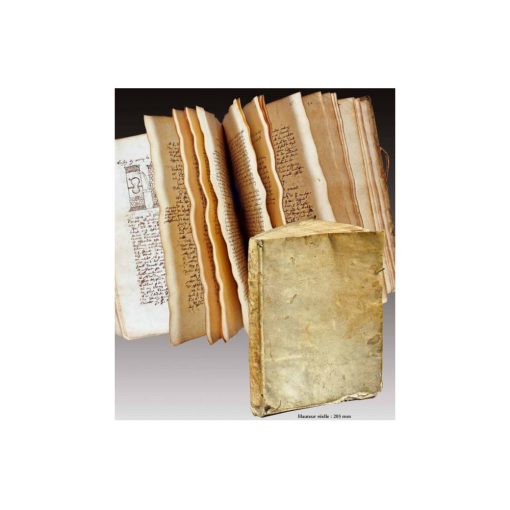 Manuscript dating from the 17th century reuniting
Planis Campy’s observations in the field of alchemy.

The text blends spiritual reflections and different accounts of his experiments.

An attractive copy bound in its contemporary limp vellum.

In this text, Planis Campy gives us an overview of his knowledge of the philosopher’s stone. He quotes Aristotle, Albert the Great, Paracelsus and describes numerous experiments and transformations of metals.

Blending alchemic experiments and spiritual reflections, this manuscript is decorated with numerous sketches and drawings explaining the author’s different experiments: to extract gold and silver, to make bronze soft like silver, to transform iron into copper.

“This renowned doctor attributed the causes of certain illnesses to the stars and pretended to cure them using Paracelsus’ method.” (Caillet)

“An author who deserves greater attention than he has received is David de Planis Campy (1589-ca.1644), who produced ten works on medical chemistry and traditional alchemy. He was a counselor and Chirurgien ordinaire to Louis XIII, and his works were collected and published in a folio volume in 1646. He wrote that alchemy is a science that teaches the means of separating the elements of each mixed body produced by nature and of separating the pure from the impure.” (A. G. Debus, The French  Paracelsians)

“The practice of magic, which drifted into private life and so often dominated political life, introduced itself in the 16th century mostly in the field of science.

No science welcomed the demon, this strange auxiliary, with more haste than alchemy; none better than alchemy tried to create a certain order in the inextricable confusion of knowledge acquired in the Middle-Ages by admitting the supremacy of an occult power that could be constrained to obey. David Planis Campi, while rejecting, as he said, the dreams of astrology, made a big deal of it, and the surgeon of Marie de Medici, rival of Amboise Paré…” (P. Lacroix, F. Seré, Le Moyen Age et la Renaissance, histoire et description des mœurs, IV)

A pleasant and attractive copy preserved in its contemporary limp vellum, a sought-after condition.

The copy, spattered with crossed-out sentences and handwritten corrections, is a testimony to the research that were being done while the text was being written.