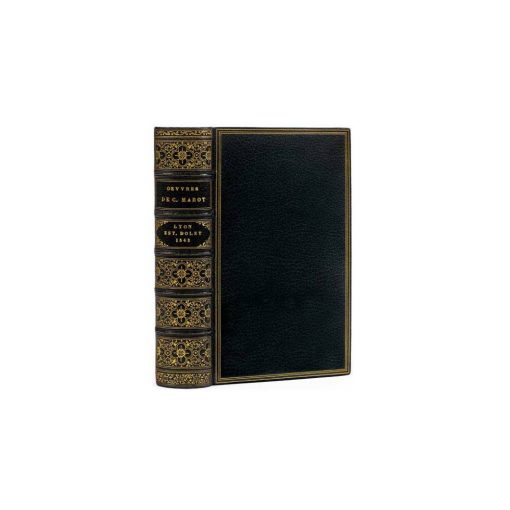 one of the most sought-after by this poet” (H. de Backer).

Green morocco, triple gilt fillets around the covers, ribbed spine with fleurons in gilt, gilt fillet on leading edges, inner gilt roll-stamp, gilt over marbled edges. Binding made in 1852 and signed by Duru.

“Precious edition in round letters (partly original), one of the most sought-after by this poet. It is the third edition given by Et. Dolet with Clément Marot’s authorization.”

In addition to the previous ones, it contains the translations of twenty new psalms — which makes 50 in total —; The “Second Livre de la Métamorphose d’Ovide” and six new pieces, enumerated in detail in the catalogue Herpin (n°36).

“The second part, which contains the newest and most recent texts of the Œuvres, 76 ll., is very important.” (Bulletin Morgand et Fatout)

“Clément Marot did not only satisfy himself with adding some new pieces; he reviewed the previous ones and often modified them; among others, his translation of the first 30 psalms was completely revised and the new text often has little to do with the former one.

This edition also includes (ll. 30 to 33 r o of the second part) the “Epistre du Coq en l’Asne envoyee a Lyon Jamet de Sansay en Poictou”, present in the Antwerp edition by Jean Steels (n°217), but that Cl. Marot had removed from the Dolet edition of 1542.

Marot’s talent lies in his spirit or, if you will, in his genius. It is unpredictable, easy, light, it animates descriptions and narratives; it dictates delicate praises; it softens the formal style of official compliments; it adds a touch of humor to confessions on “money mistakes”; it shortens petitions, hides emotions in tender love confessions. Marot’s bold and caustic humor brightens up in his “epigrams”. Many are of very popular taste; there are jests targeting monks, theologians, women; the poet gave his plays concision, which he modeled from Martial’s. His malice still shines in his other light poems, and in his songs and epistles.

A very beautiful copy with wide margins coming from the library of H. Chevreuil with ex-libris, bound in elegant green morocco from Duru and dated from 1852.