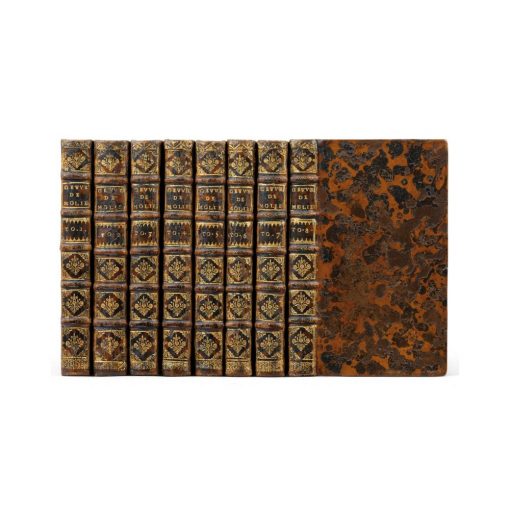 The first collective edition of Molière’s Œuvres,
printed in Paris in 1682.

One of the rarest copies preserved in its contemporary binding
and possessing a contemporary armorial provenance:

Printed in 1682, it is the first complete edition and the first illustrated one.

It is here preserved in its authentic and attractive contemporary binding.

A few years after Molière’s death (1673), his widow Armande Béjart asked La Grange, a friend of Molière, himself a comedian and faithful to his memory, to publish his complete works.

La Grange received, from the hands of Armande Béjart Molière’s manuscripts and prepared the renowned 1682 edition, in collaboration with Vivot and maybe also Marcel, another comedian.

The 1682 edition is made up of two distinct parts.

The first six volumes contain the plays by Molière which had already been printed in his lifetime.

It is the first illustrated edition of Molière’s Œuvres. It is decorated with 30 figures engraved by J. Sauvé, after Brissart.

Vivot assisted La Grange. A great amateur of paintings, he had an artistic eye and knowledge that helped when choosing the illustrator and the figures themselves.

“This edition must be considered, and rightly so, the most complete of the 17th century editions. The stage directions are introduced and, for the first time, each comedy is preceded by a particularly precious engraving showing the attitudes and costumes of the characters.” (Guibert, II, 612)

In 2001, the Librairie Sourget catalogued and sold another contemporary brown calf copy, but with lesser margins (160 mm) and without a known provenance, for 30 000 €.