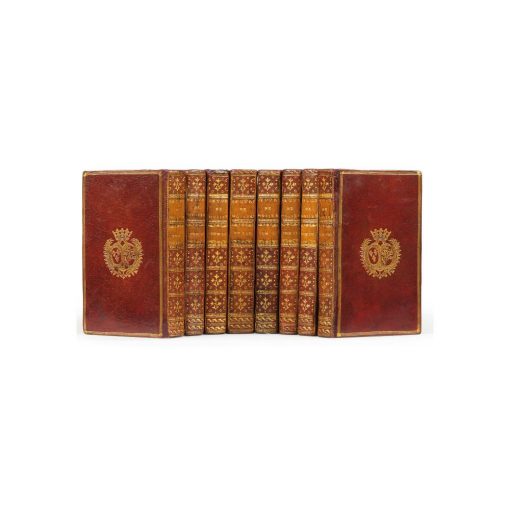 it is one of the most beautiful books of the first half of the 18th century.” (Cohen)

This edition includes 32 figures based on Boucher’s drawings.

“Boucher’s masterpiece as illustration ; it is one of the most beautiful books of the first half of the 18th century.” (Cohen)

It is decorated with 32 figures and 1 portrait engraved by Legrand based on Boucher’s drawings.

The notice informs us that “this edition will be different from the 1739 one because of the etchings that the booksellers added and chose to put before the prologues of the Princesse d’Elide, Amphitrion & Psiché ; which was not done in the previous editions. They also added some new ornaments to the frontispiece and spared nothing that could contribute to making this edition the most beautiful. Even though the drawings are the same than the ones published in 1734, it was the 1730 edition that they used as reference since it is considered to be the most perfect among those already published and no errors were added… To make this edition even more accurate, the comedies printed in the author’s lifetime were examined.”

“Boucher was extremely gifted and at the young age of 20 he won the grand prize of the Académie de peinture. His main work was the series he made for Molière, a masterpiece of illustration that some consider to be the best when it came to rendering the expressions and costumes, for the Œuvres of our great dramatic writer. They really are the painter’s drawings. Executed with a great freedom of attitudes, they are the exact interpretation of the thoughts of our great comedic poet. Those from l’École des femmes and the Précieuses are particularly well-done and have the “fine smile of a figure and of a physiognomy of a woman of the time period”. The pieces of paper where Boucher scattered his sketches came out of the connoisseurs’ archives to decorate the apartments; the women all wanted some. Such an artist was made to be appreciated and understood by a woman like Mme de Pompadour. They were born to complete each other and the memory of the king’s favorite immediately recalls the memory of her favorite painter. As soon as she was in power, she attached him to her. When she took it in her fancy to draw and engrave, Boucher became her teacher.

“Of a very liberal spirit, Louise de Savoie had her hour of popular glory when she defended, at the beginning of the Revolution, what she herself called the “rights of the nation”, and the echo of the tense conversation she had with the queen Marie-Antoinette earned her on several occasions the applause of the crowd. The comtesse de Provence had a great taste for literature and the arts. Her library was composed very intelligently.” (E. Quentin Bauchart, II, pp. 309-330)