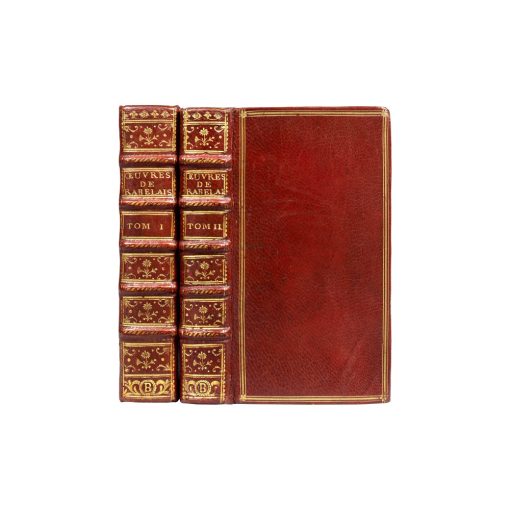 “Here is undoubtedly a very nice edition; it is a very sought-after book of which the beautiful copies are rare.” (Brunet)

It was praised at the time by the amateurs of Rabelais : “The Rabelais is finished in Amsterdam in two 12mo parts that are sold 4 pounds 10 cents in white; the printing is quite beautiful; at the end there is an explanation of several words by said editor, very well-done.” (Guy Patin)

Daniel Elzevier reprinted this Rabelais edition line by line in 1666.

“The division in 49 chapters is the one adopted in all the editions of Rabelais published between the 17th and 18th centuries.” (Willems)

The Rabelaisian romanesque universe offers a system of unique references in literature, blending fiction and reality. Behind this marvelous world, in between the lines, his contemporary world appears.

Rabelais uses his work as a mirror of contemporary realities and even sometimes turns it into a work of political propaganda.

““His book is a heap of the most vulgar scum. But one must admit it is also a bloody satire of the pope”, says Voltaire about the Quart Livre ;  Pantagruel and Gargantua are added in 1543 and 1544 on the list of books to be censored by the Sorbonne, and the Tiers livre will follow. If Rabelais remains the author of Pantagruel and Gargantua, we must not forget that these texts only represent one third of the Pantagruel gest and that their full meaning can only be grasped in regards to the entirety of his works.” (Dictionnaire des Auteurs)

A precious copy preserved in its fine old red morocco binding with the “B” cipher by René de Galard de Béarn, marquis de Brassac, stamped in gilt on the foot of the spine.

A cavalry officer, squire to the prince de Dombes, lieutenant-general of the king’s armies, René de Galard de Béarn (1699-1771) became lieutenant-general in the French army. He had a passion for music and organized the performance at the Académie royale de musique of L’Empire de l’Amour and Léandre et Héro. He left us a collection of cantatas. Voltaire praises him in his Temple du Goût.