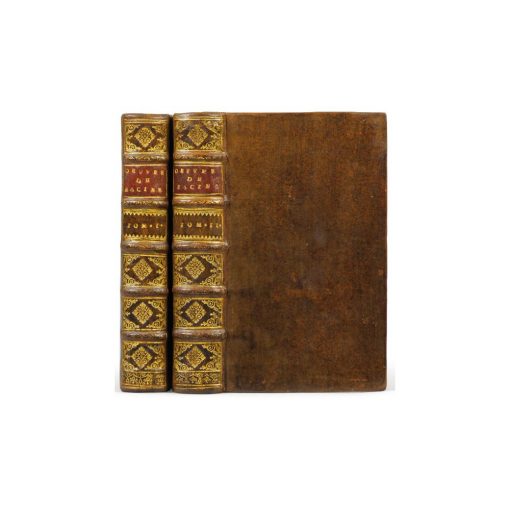 the first complete one.

An exceptional copy of the first issue,
without boards,
preserved in its pure and beautiful contemporary binding.

“First collective edition of Racine’s Œuvres, the first complete one. It is more sought-after than the 1687 one.” (A. J. Guibert)

Corrected by the author, “this excellent edition is the last given by Racine, and it set the text for all posterior edition.” (Le Petit)

“First complete edition including Esther and Athalie and the last published while the author was alive. It contains, for the first time, Racine’s complete theater.” (Bulletin Morgand et Fatout).

The “Thébaïde” and “Bajazet” include the author’s last corrections.

“This excellent edition is the last given by Racine, it set the text for all following editions. It is also the first complete one, and where “Esther” and “Athalie” are included in consequential page numbers. It does not have a general preface, no more than the previous editions, only prefaces for each play. Already, in 1687, the same booksellers had published an edition where Phèdre was present while following the pagination of the second volume. This intermediary edition is less important than the 1697 one, obviously reviewed by Racine, who made amendments to the text here and there and slightly changed the spelling of several words (…). That said, the 1697 edition was almost entirely printed according to the previous one. Racine removed some verses in the 1697 edition, in the first two acts of the Thébaïde and in the last two of Bajazet. The preface of this last play offers differences from the previous one and one page was removed at the end.

Part II of the 1697 edition includes corrections made on boards after issue, in eleven places, on pages 146, 163, 172, 273, 407, 427-428, 451, 471-472, 503. In total, 9 boarded leaves only including typographic corrections or insignificant changes on mistaken words. These boards can be differentiated from the primitive leaves because the words Tome II are written at the bottom on all, whereas they are only present on the first leaf of each quire.” (Le Petit)

“Last edition published during the author’s lifetime: it is the first one containing all of his theater, meaning 12 plays. The good copies in old binding are sought-after, and rightly so.” (Edouard Rahir)

“The life of Jean Racine (1639-1699) is made up of contrasts. An orphan child, he is raised by his maternal grandfather, is schooled at Port-Royal, and for a time considers an ecclesiastical life. But at 22, he turns towards the “mundane” and meets with great success with his second tragedy “Alexandre le Grand”. During the ten following years, he garners triumph after triumph, imposing himself, with Bérénice, over Corneille, who is older than him, and silencing the cabbala that sought to tear apart Britannicus (…) ; but suddenly he falls silent, contracts a marriage that isolates him, renews with his piety — all in all a real internal crisis that explains, better than the fact that he was appointed as Louis XIV’s historiographer, the retirement, in full glory, of this man who was not yet aged forty. He made only two come-backs, with texts inspired by the Bible (Esther and Athalie). In 1697, the third edition of his Œuvres, containing his last two plays, sets his legacy for us: some plays in verse but, mostly, his eleven tragedies. Other than the comedy Les Plaideurs, and the plays mentioned above, it includes La Thébaïde, Bajazet, Mithridate and Iphigénie. La Bruyère suggested in his famous parallel that Corneille was a bit frightening because he painted men “as they should be” whereas Racine was appealing because he painted them “as they are”. Racine was able to touch audiences more by placing in the center of his stories, which were simplified to the extreme, many intriguing female characters from the most diurnal to the most nocturnal.” (En Français dans le texte)

A precious copy of the very first issue including the 9 leaves of part II in their original state, before the corrections mentioned by Jules Le Petit, preserved in its contemporary pure calf binding.