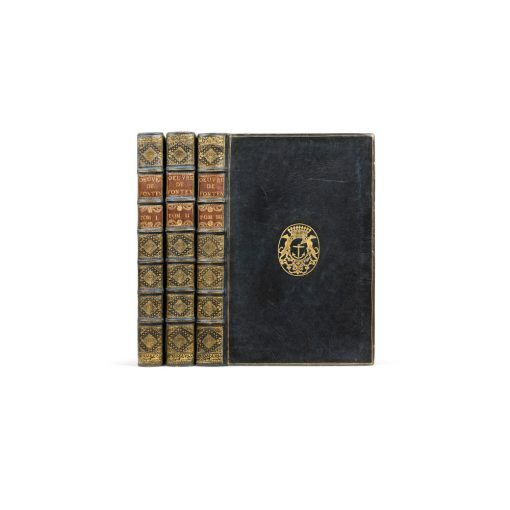 A splendid copy,
one of the few printed on large paper of folio format,
contemporary bound in morocco with the arms of
Samuel Bernard, “the kings’s banker”.

One of the few printed on large paper of folio format, with the text framed.

“Superb illustrations.  6 frontispeces or drawings by B. Picart, 1 with the portrait of Fontenelle engraved by Picart, based on Rigaud, 2 fleurons on the titles and 174 vignettes and tail-pieces by B. Picart.” (Cohen)

Fontenelle, who lived to be 100, met with great success while alive and, more so than Fénelon, represented the transition between the 17th and the 18th century.

“He surpassed all others because of his assurance and the diversity of his knowledge and because of the tranquil certainty that he had of the progress of the modern world; like Voltaire a century later with Newton, he sought to instill in the mentality of his time a new vision of the world that came from Copernic and Descartes’ discoveries. When the famous quarrel between the Ancients and the Moderns erupted, Fontenelle aligned himself with the latter. He affirmed his contemporaries’ superiority over Homer, Plato and Demosthene because, he said “having climbed upon their shoulders, we have a better view”.” (Dictionnaire des Auteurs)

A precious and superb copy, one of the few printed on large paper of folio format, preserved in its contemporary morocco binding with the arms of Samuel Bernard (1651-1739).

“Samuel Bernard was one of the most famous merchants whose wealth considerably grew during the ministry of Chamillard ; his fortune was immense and he put it to good use ; he also loaned considerable sums to Louis XIV and Louis XV. He was an advisor to the king.” (O. Hermal, pl.1042)