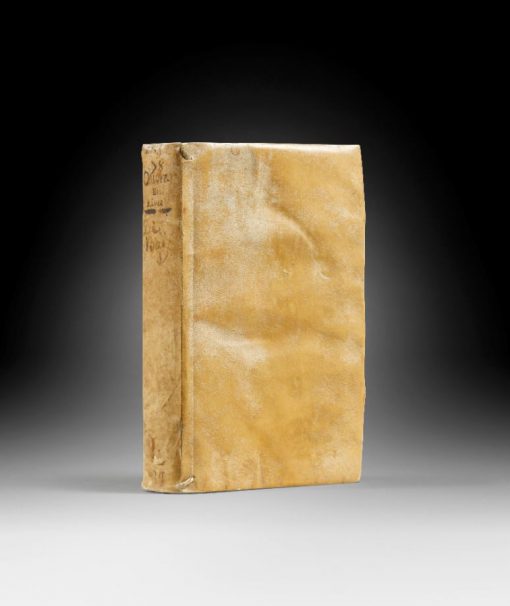 First edition of Œuvres en rime by Baïf,
a member of the Pléiade and an intimate friend of Ronsard.

And preserved in its contemporary overlapping vellum.

First edition of the Œuvres en rime by de Baïf, an eminent member of the Pléiade and an intimate friend of Ronsard, preserved in its very attractive contemporary overlapping vellum.

“Book published alone and as a collection. It contains 57 poems divided into nine books” (Tchémerzine).

The general dedication to Charles IX retraces the steps of de Baïf’s calling and underlines the collection’s rich diversity ; the nine books of the Poèmes are made up of the more ample pieces.

The section opens with a very interesting treaty on astronomy dedicated to the queen mother and published separately in 1567 : Le Premier des météores. After, in alternating order, come several epistles to personal friends, mythological stories in the manner of Ovid and numerous plays of circumstance, like the Dithyrambe, in honor of Jodelle, or the Épithalame of François II.

The death of Lazare de Baïf, Jean Antoine’s father, in the fall of 1547, disrupted our poet’s quiet and studious life. According to Claude Binet, Baïf the orphan and his friend Ronsard then both became the students of Dorat at the Collège de Coqueret, where the humanist was appointed supervisor.

“Baïf, who was a young boy (fifteen years old), chose to live with his tutor, at the Collège de Coqueret, where he most likely taught. Ronsard, on the other hand, lived as early as 1548 with his friend Julien Peccate, making the most of the freedom his youth (23 years old) offered him even though we know he was not wealthy, while still following Dorat’s teachings, of course, up until 1549 or 1550, if the poet himself is to be believed”.

Out of the six poets of the famous « Brigade », Ronsard chose him to form the Pléiade, named in honor of the seven alexandrine poets who, in the 3rd century BC, had placed their group under the protection of the constellation.

“Baïf felt himself a reformer : he wanted to simplify spelling by reducing it to its phonetic parts, and apply to French poetry the metric verse, chanted like the Latin hexameter. Seeking to find a link between poetry and music by applying the same melodic laws to both, he came up with the idea, in order to ensure his reform’s success, to found an « academy of music and poetry », as much a conservatory as an Académie Française, which opened its doors in 1570 under the protection of Charles IX, and among whose members were Ronsard, Desportes, du Perron, Gui de Pibrac”

“King Henri II was so taken with this idea that he had the Academy’s debates held in his apartments. The idea of a measured chant close to the ancient Greeks’, defended by de Baïf, would be quite consequential, as not only would it improve the polyphonic song of the Renaissance, with musicians like Mauduit and Lejeune, but it would also play a decisive role in the birth of the opera”

“Furthermore, one must appreciate the grace of his small tableaus, freely copied from the Anthologie and alexandrine literature, and whose effects he highlights with a picturesque sense of reality. He broaches familiar subjects with a sometimes happy verve and an ordinary vocabulary, full of color and life. Let us cherish, in Les Passe-temps, the epistle to Estienne on the embarrassments of Paris ; in the Poèmes, the ode to the Nymphe de la Bièvre brings to mind the Brigade’s joyous parties in the countryside while deploring the filth already accumulated in the lovely river by the Gobelin dyers”

A precious wide-margined copy (height of 174 mm instead of 160 mm for the ordinary copies and 168 mm for the de Backer copy), preserved in its attractive contemporary overlapping vellum.

Provenance: handwritten ex-libris on the title page and André Gutzwiller, with ex-libris.