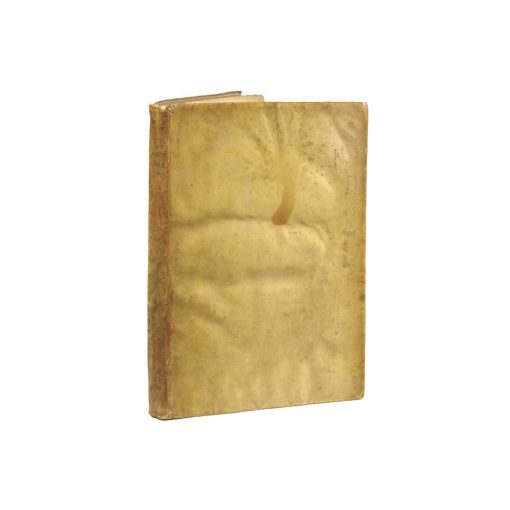 bearing his signature at the bottom of the title page,

First collective edition of the Œuvres by Saint-Justin printed by Robert Estienne according to a manuscript in the Bibliothèque royale, remarkably printed with the famous “grecs du roi” font by Claude Garamond.

It reunites the Apologies, the Dialogue avec Tryphon and several other apocryphal treaties.

An exceptional and unique copy having belonged to Racine and bearing his autographed signature on the title page.

“We know that the gentlemen of Port-Royal appreciated the Greek language more than the Latin and that their prized pupil had become an excellent Hellenist.” (Jacques Guérin)

“Racine did not satisfy himself with reading the Ancients, he translated their works, commented them, wrote down some passages : this is how one transforms one’s books into substance.

He translated Plato’s Banquet, isolated several passage from Saint Basil and a great number of Greek and Latin authors. The Greek and Latin books that Racine read have become objects of curiosity and worship.

In his preface of “Alexandre le grand, tragédie, 1665”, Racine reveals that the love affair between Alexandre and Cléofile is not of his own invention :

“Justinius mentions it as well as Quintus Curcius. These two historians say that an Indian queen named Cleofile gave herself to the prince in the town he had under siege. Later he put her back on her legitimate throne as a consideration to her beauty. She had a son, whom she called Alexandre.” Racine then quotes Justinius’ exact words. (J.L. Geoffroy)

“We had to wait until Robert Estienne’s 1551 edition in order to read the complete Works of Justinius.” (Renouard)

“The best edition of the complete Oeuvres by Justinius.” (Artaud de Montor)

“Editio princeps, beautifully printed in the first font of the “grecs du roi”, from manuscripts in the Royal Library … a most important contribution to the study of Christian antiquity … The edition was completed and published by Charles Estienne after Robert’s final departure for Geneva.” (Schreiber)

One of the oldest and most renowned Apologist Father, Justinius was born in Flavia, in Samaria, at the end of the 1st century. He began by zealously studying philosophy : but the Stoics, the Peripatetics, the Pythagoreans, and the Platonists he considered could not give him a satisfying explanation of the nature of God and his perfections, of the nature of the soul and its destiny, and so he turned to Christianity where he found the solution to these great mysteries.

He embraced the Christian religion but did not give up his philosopher’s cloak.

Justinius wrote two Apologies which he presented to Antoninus Pious around the year 139 and Marcus-Aurelius, around 162.

“In his texts, of which only one made it to us complete, he calls on the charity of the Christians, on their patience through suffering ; he shares what went on in their assemblies.

He tries to prove that Christianism is on a par with reason and the most famous doctrines of the Greek philosophers. In his apologies, it is easy to notice this blend of Christian ideas and neo-platonic opinions which will later characterize the school of Alexandria.

Justinius was martyred in Rome in the year 165.

His works are a precious source for those who wish to study the first centuries of the Church.” (A. de Montor)

Jean Racine’s personal copy, bearing his signature at the bottom of the title page.

Racine, a Jansenist, advocated a return to religion, to the original sources and texts.

Les Oeuvres by Saint-Justin must have been one of the stones on the wall of his beliefs.

Provenance : Libraries of Jean Racine, with his signature on the title page, Auger (ex-libris) and Paul-Louis Weiller.