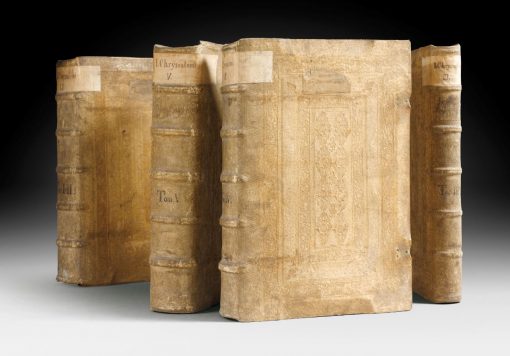 The great famous edition of the Works

An exceptional complete copy of the famous Latin edition of the collective works of Saint John Chrysostom partly translated from Greek to Latin by Erasmus, with the text on two columns, historiated letters engraved on wood, printer’s labels on titles and on the endleafs of the five parts.

Saint John Chrysostom, Church Father and bishop of Constantinople, born around 347 in Antioch, and who died in Comane on 14th of September 407, came from a wealthy family ; his father was an officer appointed to the prefecture of the Orient pretorium. His mother got him the best education and, though Christian, trusted him into the hands of the pagan sophist Libanius, who headed in Antioch the most famous school in Asia. John quickly stood out because of his gift for speech which later earned him the name Chrysostom, meaning golden mouth.

“Chrysostom’s writings are very interesting, not only from a literary and ecclesiastical point of view but also from a historical one. He gives precious details on the mores and uses of the time and the absurd luxury of his society. Amongst his main texts are: his Exhortation to Theodore, addressed to one of his friends, who, after having embraced a life of solitude, had come back to society ; his treaties on the mores of women and on virginity, where he attacks the deaconess and adoptive sisters and praises virginity, which takes women away from marriage and widows away from a second one ; his sermons on the state of affairs in Antioch ; those he pronounced in Constantinople, notably the one in favor of Europe ; his sermons on the Genesis and the Old Testament ; his comments on the psalms, the prophets and on the New Testament and other topics.

Below is the judgement carried out by M. Villemain on Chrysostom as an orator and writer:

“No man has better understood the ministry of word generated by the Gospel. He is the epitome of the Greek who became Christian. Austere reformer despite his melodious and lively words, he drew inspiration on the charming Greek fables that so touched the imagination. Chrysostom’s eloquence probably, to the moderns, resonated in Asia. The great images he borrows from nature often come back. His style is bright but maybe not so varied ; it is the splendor of the bright and even light that shines on the countryside of Syria. However, reading his work, one cannot imagine oneself so close to the barbary of the Middle Ages. One wonders : will society be reborn under a new cult and rise above Ancient times without looking like it ? A great man’s genius gave you that illusion. Look again and you will see the Empire being dismantled from all sides.”

This precious edition partly translated by Erasmus, was printed in Basle by Froben, the editor of the general edition of Erasmus’s work.

Erasmus’ stay in Basle corresponded to his mindset and habits. Basle is a mixed city, were Catholicism and the Reform mostly cohabited peacefully.

Erasmus brought classical erudition to the north of Europe, the Netherlands, England and Germany. Not only by propagating old languages or giving an impulse to Greek masterpieces, but mostly through the refinement of taste : an exquisite Latin, a sense of the literary and artistic beauties of the authors, the sparkle of a bubbling yet easy spirit, the honor given to studies with a reputation for being abstract and difficult, and, mostly, the popularization of ideas and practices buried in unknown books.

A precious copy, wide-margined, preserved in its beautiful and decorated contemporary binding.