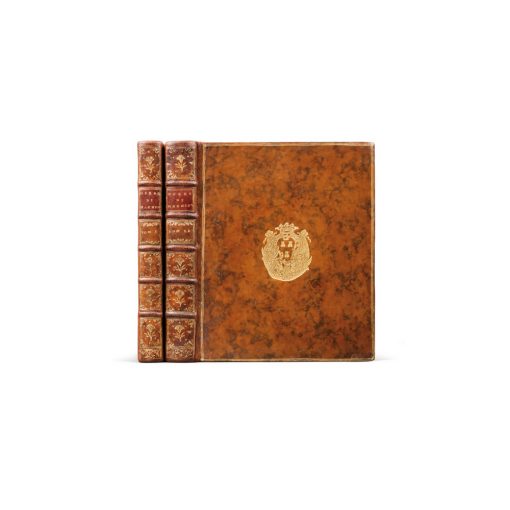 Rare and precious edition of the “Opere di Machiavelli”.

Rare and precious edition of the Opere by Machiavelli missing in Gamba.

First edition mentioned by Brunet of “the principal editions of Machiavelli’s Opere printed in the 18th century and worthy of being mentioned”. (Brunet)

Machiavelli’s importance is proportional to the interest the 18th century had of politics: as interest in political science increases, so do the references to the Prince.

A real political movement was created. The question of liberty is fundamental to Machiavelli, who associates the law to the desire for freedom, which is what the quest of the Enlightenment was. If the Prince is considered by the Church to be an impious text, many philosophers manifested a keen interest for the “republican” maxims found in this treaty reputed to be odious.

In his own way, Montesquieu continued Machiavelli’s work.

Nicollo Machiavelli (1469-1527) wrote in one session the 26 chapters of the Prince, his masterpiece, in 1513. His last text, The History of Florence, was started in 1520 and finished in 1526, the account ending with the death of Lorenzo di Medici and the alteration of the political balance of Italy.

“His genius principally lied in the way he brilliantly treated modern history. He seized, through his superior genius, the real principles of the constitution of the States, unthreaded their motives with finesse, explained the causes of their revolution; basically, he carved a new road and examined all of the depths of politics.” (Diderot)

A beautiful and precious copy, on large paper, with wide margins, preserved in its attractive contemporary calf binding with the arms of la Pompadour.

From an artistic point of view, she had great influence on her era : “She inspired good taste and the arts during the period she called her “reign”, says the baron Roger Portalis, in his nice book on the Dessinateurs d’illustrations au dix-huitième siècle. It is under her influence and inspiration that Carle Vanloo and Boucher painted, that Bouchardon, Coustou, Falconnet and Pigalle sculpted their marbles ; that Cochin and Eisen drew, that Guay engraved his stones, and each of these artists’ work bears the Pompadour seal.”