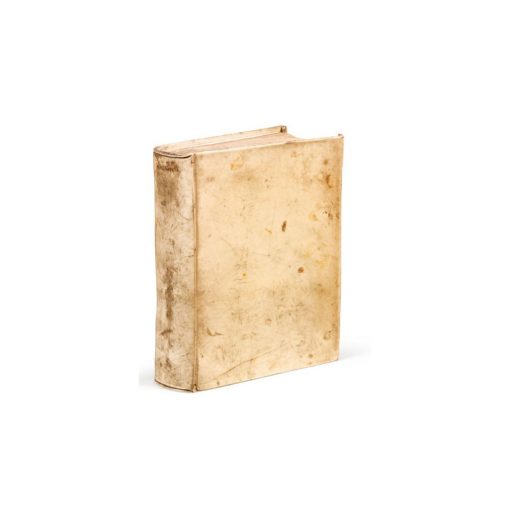 The copy is preserved in its first binding in ivory vellum.

First collective and sought-after edition of the Opere by Machiavelli, said to be “alla testina”.

“Gamba described, in his “Serie des testi”, five editions of Machiavelli with the date of 1550 ; but of those five editions the first two are the only ones where the pagination is linked to the quotes from La Crusca’s vocabulary, and thus the only ones amateurs should be interested in. Here is the description of the first: it begins with a general frontispiece, followed by the “Tavola dell’opere” and the privilege given by Clement VII in Blado ; then we find: 1° the “Historie”, 351 pp. preceded by 4 separate ll. ; 2° “Il Principe”, 116 pp. preceded by 2 ll. not numbered ; 3° the “Discorsi” that end on page 304 and are preceded by 8 ll. numbered separately ; 4° the “Arte de la guerra”, 168 pp. including the half-title; 5° “l’Asino d’oro”, 170 pages preceded by the half-title. The edition we call second was copied page by page on the first but not line by line; here are some of the differences that distinguish it from the other: the first four treaties all have, instead of a half-title, a particular title with Machiavelli’s portrait and the date 1550, like the general title; then, the last page of the “Arte della Guerra” is numbered 158 instead of 168, and in the same part, at the top of page 129, we can read “Libro sexto” instead of “libro sesto”.”

Nicollo Machiavelli (1469-1527) wrote in one session the 26 chapters of the Prince, his masterpiece, in 1513. His last text, The History of Florence, was started in 1520 and finished in 1526, the account ending with the death of Lorenzo di Medici and the alteration of the political balance of Italy.

“His genius principally lied in the way he brilliantly treated modern history. He seized, through his superior genius, the real principles of the constitution of the States, unthreaded their motives with finesse, explained the causes of their revolutions; basically, he carved a new road and examined all of the depths of politics.” (Diderot)