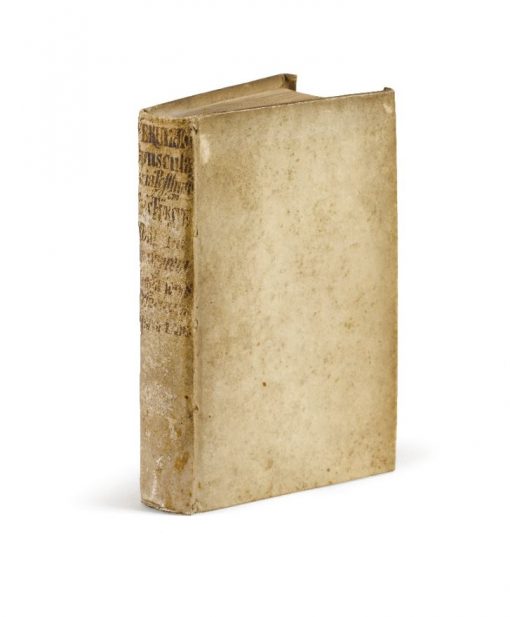 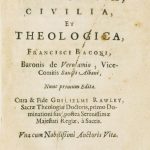 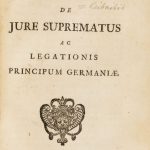 Rare reunion of two major texts by Bacon and Leibniz
in a first edition.

Copy preserved in its contemporary vellum,
from the collection of the German philosopher and sociologist Ferdinand Tönnies (1855-1936).

First edition of the Opuscula varia posthuma edited by William Rawley, “the most important disseminator of Bacon’s works and propagator of Bacon’s reputation in the seventeenth century” (Rees, p.LXXIII).

“Francis Bacon is one of the most extraordinary geniuses ever to live in any century.

Always exhibiting a superior, broad, flexible and original mind, he created many branches of philosophy and was a profound moralist and a brilliant and energetic writer” (Michaud).

“His proposal was: “A total reconstruction of sciences arts and all human knowledge… to extend the power and dominion of the human race… over the universe.”

He held that the executive rather than the legislature should administer the state, as the later could be as tyrannical as the former; his notions for a planned development of science and social organization based on scientifically ascertained facts are still relevant to what has become one of the crucial problems of the twentieth century” (PMM).

“Bacon attempted to change the shape of other men’s mind. He believed that rhetoric, as the force of eloquence and persuasion, could incline the mind towards the pure light of reason” (J. Pitcher).

“In terms of conscious power and statesmanlike eloquence he expressed ideas far in advance of his time” (W. C. Dampier)

First edition of the De Jure by Leibniz.

“The first edition of this famous work that set the foundations of European public law is quite rare and deserves to be all the more sought after as it comes directly from Daniel Elzevier’s press.

The Elzeviriographs omitted it even though it is present with the asterisk in the 1681 catalogue.

“In this work, Leibniz argues that German princes have the same right of sovereignty as regards ambassadorial representation as do kings and Italian princes, anticipating the Pan-European federalism that would, in part, result from the Treaty of Utrecht” (McClure, Sunspots and the Sun King, p. 252).

“When we started tackling the Peace of Nimègue, we encountered some difficulties surrounding the ceremonial in regards to the free princes of the Empire who were not Electors : we didn’t want to grant their ministers the same titles and treatments as the Italian princes, such as the duke of Modena and Mantua. M. Leibniz wrote a book in their favor entitled “Caesarini Furstenerii, de jure suprematus ac legationis…”, which was published in 1677.

He gave himself a fake name, hence underlying that he was defending the Emperor as well as the princes’ interests ; in defending their dignity, he was not being detrimental to the Empire’s… The book from the fake Caesarinus Furstenerius not only contains an infinity of remarkable facts but also a quantity of small facts, mostly regarding titles and ceremonies, most often neglected by history’s most knowledgeable scholars… One feels that Mr Leibniz’ spirit takes flight whenever possible and climbs to broader heights” (Fontenelle, Eloge de Leibniz).

Leibniz’ ideal was a society of nations of spiritual and religious nature.

A copy preserved in its contemporary overlapping vellum.

Provenance : The collection of Ferdinand Tönnies (1855-1936), German philosopher and sociologist, influenced by Hobbes, Hegel and Marx and author of the renowned book Gemeinschaft und Gesellschaft (1887). He influenced Max Weber.