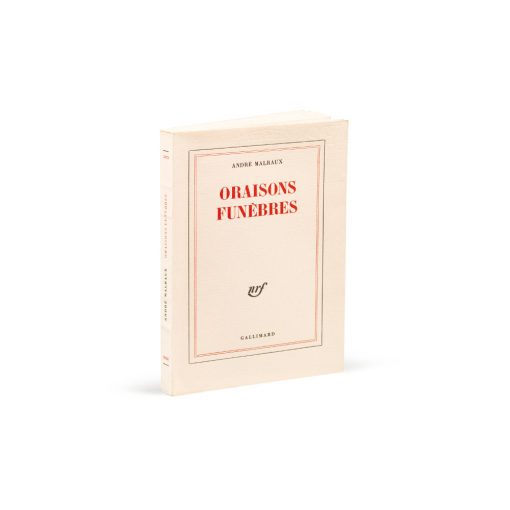 One of 80 copies printed on Dutch paper from the leading copies.

A very beautiful copy, very pure, uncut, preserved in its wrappers,
as issued, as new.

One of 80 numbered copies on Dutch paper, first issue.

In his preface to the Oraisons funèbres, Malraux establishes some historical links, either between people or events, through which he intends to place these speeches in their proper dimensions, transcending the circumstantial in order to give it the force of destiny.

The writer did not consider this book like a reunion of scattered unrelated speeches but saw it as a unique ensemble of his work: the speeches that had to be saved from dispersion, from oblivion.

“The Oraisons funèbres is a literary work in its own right, where history becomes one of the ferments of re-creation.” (Michael de Saint-Chéron)

The Oraisons funèbres can acquire a revelatory function: it is the “immortal language” that Malraux seeks, relentlessly, throughout his life and his work, and which flourishes with his humanism. It then becomes, as suggested by his choice of epigraph, an “act by which man tears something away from death”, a sacred act, a total act, where art and action blend together to better decipher the possibilities of survival of man and his greatness.

The impact of the speeches given by the author of the Oraisons funèbres is similar to Bossuet’s ; but at the same time, he adapts them to modernity because his ideas are resolutely innovative.

The Oraisons is the epitome of the act of survival: it is a pure act of revolt against the absurdity that haunts human condition: an “act by which man tears something away from death”. The Oraisons funèbres celebrates life and, most of all, men, those who know how to make it triumph.” (Gérard Marie, L’oraison funèbre selon Malraux, ou comment concilier l’art et l’action, Revue d’histoire littéraire de la France 6/2002 (Vol. 102), p. 1001-1012)

“The unity of these texts resides in a “certain idea of France”, that owes as much to Michelet as Charles de Gaulle, and also in its particular idea of art. The book allows us to rediscover, whatever the pretenses of eloquence, an inimitable accent: coming from an orator who speaks art’s legend, then the century’s legend, an agnostic who wants, despite time and death, to have faith in man.” (Marius-François Guyard)

A very beautiful copy, very pure, uncut, one of 80 numbered copies printed on Dutch paper, preserved in its wrappers, as issued.