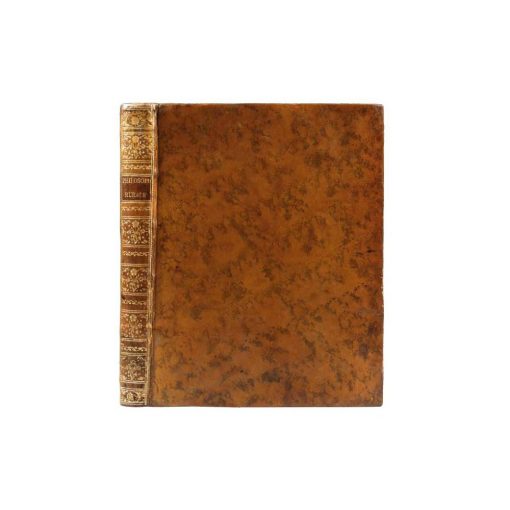 First edition of this major work
resulting from the close collaboration of Mirabeau and Quesnay.

The copy bears an ex-dono of the auteur
and contains numerous autographed annotations in the text.

First rare edition of this major work, “the best of Mirabeau’s texts” (E. Daire), including three economic charts by Quesnay on full pages and out of pagination.

This work, “Mirabeau’s best” (Journal des économistes, II, p.66), is, according to Weulersse, “the product of an intimate collaboration between Mirabeau et Quesnay”.

The Philosophie rurale, a major Physiocratic text, has remained in the shadows of François Quesnay’s Tableau économique et des autres écrits for a long time. Today, its essential place in the Physiocratic corpus is better known. However, there is still some uncertainties concerning the date of publication of La Philosophie rurale and the exact repartition of the different parts between Mirabeau and Quesnay.

“In the “Notice abrégée des différents écrits modernes qui ont concouru en France à former la science économique”, Du Pont inserts the Philosophie rurale in the month of November 1763. However, Grimm’s Correspondance littéraire does not mention it until February 1764. But the notice suggests that the book had been printed for some time before it was authorized for sale. Other sources confirm this gap of at least four months between the end of printing and notice of sale, probably due to censorship. In the Journal de la librairie written for the comte de Malesherbes, the director of the Librairie, inspector d’Hémery, mentions the Philosophie rurale at the date of September 8th 1763. With the Philosophie rurale the ambiguity concerning authorship in the 18th century, and especially within the Physiocratic school, appears. The text is generally attributed to Mirabeau. That being said, well-informed witnesses from the time recall the determinating part played by Quesnay in its creation.” (F. Quesnay, Œuvres économiques complètes, pp. 639-642)

“It is with the publication of the Philosophie rurale, one of the Physiocrats’ major work, that Mirabeau associates political economy and science. In this text, Mirabeau raises awareness on the importance of “calculations”, a remarkable aspect of Quesnay’s political economy, in his Tableau économique. Enlightening the governing elite on the existence of a natural order and the necessity of establishing a government based on the acknowledgement of economic laws: that is the objective the marquis de Mirabeau set himself.” (Cesare Beccaria, M. G. Vitali-Volant, p.43)

“He reached the peak of his reputation with the text that he published in 1763, the Philosophie rurale ou Economie générale…” (Revue bleue politique et littéraire)

A precious copy, bearing an ex-dono by the author and containing several autographed annotations by two of the former owners, who commented the text in the margins, on pages 40, 103, 107, 247 et 329, before the copy was bound.

A precious copy, with wide margins, very pure, and preserved in its contemporary binding.

General commander of the Italian militia in 1923, he participates as a member of the quadriumvirat to the march on Rome even if he does not approve it. He represents the monarchic and legitimist wing of the fascist movement. From 1923 to May 1928, he is governor of Somalia. On July 24th 1943, he votes in favor of Dino Grandi’s order of the day which removes from Benito Mussolini his title of commander of the armed forces. After the war and the establishment of the Italian social Republic, he is condemned to death in abstentia at the trial of Verona.