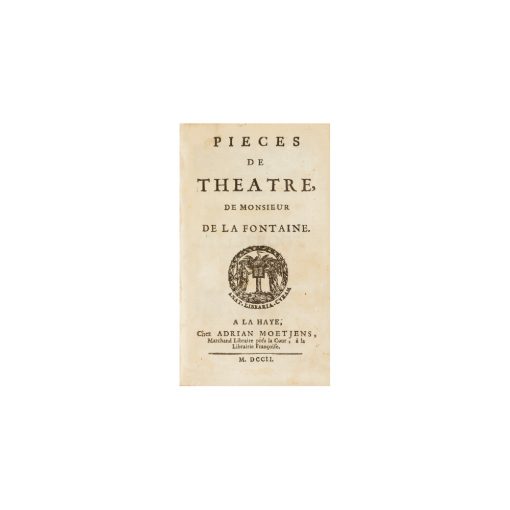 An attractive copy preserved in its contemporary vellum binding.

From the library of H. Destailleur, with ex-libris.

Tchémerzine describes the first French edition published the following year, in 1702, also “quite rare” and based on the Dutch edition here presented.

The bibliographer (III, 893) mentions a 1699 edition “cited by M. Henri Regnier in the collection of the Great French Writers, but no one knows about it”.

“First collective edition of La Fontaine’s Théâtre. After the 5 plays were added Médée, a tragedy (by de Longepierre), Paris, 1694, and Alizon, a comedy (by L. C. discret), Paris, 1664.” (Destailleur)

Médée is present here in a first edition.

Longepierre had brilliantly studied Greek and Latin with the Jesuits. He was a fervent admirer of the Greeks. His Médée, which received a cold welcome, was performed to great success in the 18th century ; some renowned actresses, like Melle Clairon, gave talented performances as the lead character, in a role that is cut out for such greatness.

“The play had such a success that it had to be clandestinely reprinted in Holland under the name of La Fontaine, which Genest took with philosophy.” (M. Tourneux, Revue d’Histoire littéraire de la France, p.642)

“The first play from this collection bears the name of La Fontaine ; but it is not by him : Pénélope ; it is by the abbot Genest. Then follow : Le Florentin, Ragotin, Je vous prens sans verd. And finally the Duc de Monmouth, a play by de Waernewyck that was never performed.

Each play has a particular title but the page numbers are consecutive.” (Tchémerzine).

“Le Florentin is one of these short one-act plays that the public welcomed with utmost pleasure.

The short comedy Florentin has had a reputation of being a masterpiece ; and to be truthful, we know of no other that surpasses it, not in terms of creativity or the fluidity of its style. The scene of the confidences especially may be the most ingenious and comical that we have in our theater. (Preface of the 1734 edition.)” (Walckenauer, Œuvres complètes de Jean de La Fontaine)

Short satirical play, le Florentin is aimed at Jean-Baptiste Lully, who, after having hired the poet to compose an opera on Daphne, refused to put it to music, preferring Quinault’s Alceste. Lully was a Florentine, hence the title. This short play in verse tells how La Fontaine, attracted by Lully’s nice words, accepted his proposal, and how he was then later basely duped by him. The verve present in the text makes Lully appear ridiculous and loathsome. But even in its most violent traits, La Fontaine expresses himself with a depth that, by contrast, renders the whole thing comical.

An attractive copy of this rare first edition preserved in its contemporary ivory vellum.

Our searches in the international public institutions have enabled us to find only one copy of Penelope ou le retour d’Ulysse : Oxford.