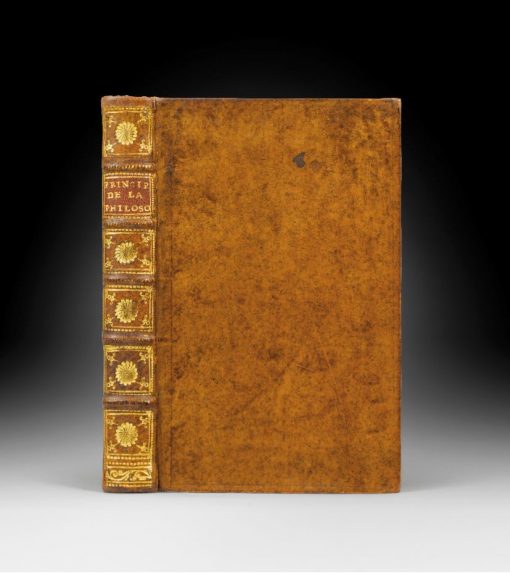 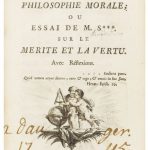 From the library Dauger with handwritten ex-libris from 1745.

It is decorated with a frontispiece, one figure, one fleuron and 2 vignettes by Durand engraved by Fessard.

By translating and loosely adapting “The Inquiry concerning virtue or merit” by Antony Ashley Cooper, third Earl of Shaftesbury, Diderot singled out the text he felt was most representative of the author’s thoughts. “I read and reread : I filled myself with his spirit and I closed his book, so to speak, when I took up the quill.”

“Diderot didn’t translate Shaftesbury’s book ; it inspired him, as he explains in the foreword.” (Tchemerzine)

Diderot inserts a text at the beginning addressed « À mon frère » (the future abbot), where he says that he sought in his “Essay” “an antidote destined to repair a weakened temperament inside me”.

Diderot draws the reader’s attention to three essential points : the moral virtue that “some pagan philosophers already practiced ; the gratuity of virtuous actions by opposition to the hope of future goods and the dread of eternal suffering ; the superiority of a simple faith in God over revealed religion.

Diderot’s personal reflections are printed in smaller characters under the passages of the treaty that they tend to comment or explain.

“When going through Diderot’s notes, we can see that the problem of an ethic that would be distinct from religious faith is dear to him. Paraphrasing some passages from Shaftesbury, he eulogizes honest passions. But mostly, the former student of the Jesuits and of the faculty of theology of the Sorbonne vividly recognizes the importance of a lay morality able to replace the outdated religious values : hence the sarcasms, that follow in the notes, against popular superstitions, the miracles of the deacon of Paris and the delirious behavior of the “convulsionnaires” of Saint-Médard. It is in light of Shaftesbury’s profound remarks on the enthusiasm of crowds, on the fanaticism of zealots and on common sense that Diderot comments and interprets the morbid character of superstitious phenomena. A misheard devotion only destroys the good inclinations of nature and the foundations of moral obligation. However, all serene and honest beliefs must be based on good morality. The dialogue The Moralists (1709), from which Diderot drew some of his notes, renews in a more complete and mature fashion the different philosophical themes scattered in his other writings: the controversy over the selfishness of Hobbes, the idea of an innate sociability in men and of their spontaneous kindness. We know that Leibniz thought to have found “almost all of his Théodicée before it saw the day” in Théoclès’s hymn to the creative nature of nature. And it’s true that in the background of the phenomenology of passions he brushes on in his “Essai” lies a metaphysical and pantheistic optimism, analogue to the one expressed by the pope “all is well”. Here, Diderot limits himself to underlining the moral aspect of natural kindness but not without insinuating in his notes a shift from deism to atheism.” (P. Casini, Dictionnaire de Diderot, pp.177-178)

A very attractive copy of this rare first edition, very fresh, preserved in its contemporary binding with a particularly richly decorated spine.

It bears on the title page the following hand-written ex-libris: A. Dauger, 1745.

We know that a copy of l’Essai was given to Jean-Jacques Rousseau on the 16th of March, 1745.