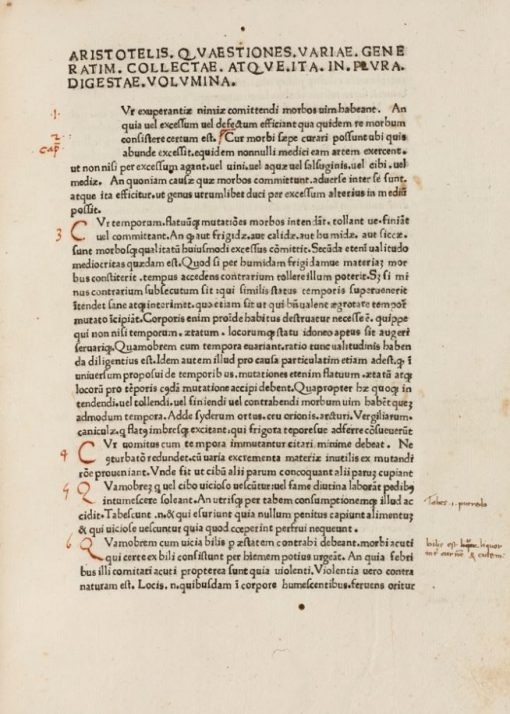 A precious wide-margined copy, with rubricated initials
and numerous Latin annotations in the margins.

Extremely rare first edition of Aristotle’s Problemata, one of the founding texts of western civilization.

Printed in small numbers on a beautiful thick paper.

“A very scarce and valuable edition and which appears to be wanting in E. Spencer’s and most of the principal collections” (Thomas Thorpe).

“This edition, which is without any date, place, is, I believe, the first impression of This Treatise. Panzer supposes it to have been printed about 1471; but I confess myself wholly unable to give any date which may be founded on any firmer basis than that of mere conjecture; and I must content myself with referring, as Pauzer does, to Clement, T.II, p.104; and Denis Suppl. P.403, Panzer, V, IX, p.165 cites an edition in 4to of this Treatise under the following title: “Aristotelis Problemata determinantia multas quaestiones de variis corporum…” and refers to Thott, V, VII, p.156. Mr. Dibdin gives a description of this edition in the 4th vol. p.442-3 of his Bibl. Spencer, where he supposes it to have been executed about 1486 or 1490.

The Problemata is made up of scientific dissertations written and presented in the form of questions and answers and is divided in 20 chapters on topics like mathematics, logic, natural and medical sciences, literature…

This Latin translation of the Problemata is the work of Theodor Gaza. Born in Thessaloniki, Theodor de Gaza went to live in Italy after his native city was overtaken by the Turks in 1429. He taught Greek in Sienna and then, prompted by the duke, went to Ferrare, where he founded an academy and became its first rector. He was a brilliant Greek teacher. He also perfectly knew Latin, which he had studied under Victorino of Feltre, and the pope asked him to translate into that language some of the best Greek works. The translation of Aristotle’s Problemata brought him the protection and esteem of the cardinal Bessarion.

“In the Renaissance the Problemata remained to be read and studied. Of special interest is the 15th century translation made by a leading humanist scholar, Theodor of Gaza, who was the most skillful and popular of the Renaissance translators of Aristotle.”

The Problemata, like all of Aristotle’s texts, were censored.

“The Church’s hostility is one of the main reasons why the text was not easily accepted. It was first censored at the Paris synod in 1210, which forbade under punishment of excommunication anyone from teaching “the works on natural philosophy by Aristotle”.

Innocent IV in 1245 and Urban IV in 1263 still dreamed of publishing some kind of expunged version, which was impossible considering so many translations were already circulating and the fact that Aristotle’s works were being admitted into the university’s curricula. The Faculty of Humanities in Paris took a pivotal step in 1255 by adopting in its statutes Aristotle’s works as “text books”.

Aristotle’s influence on late medieval culture is so vast and deep one cannot even define its nature and range.

Aristotle gave philosophers and theologians a scientific ideal, an organic and hierarchical concept of knowledge, instruments needed for analyses and logical demonstrations, principles and definitions, some fundamental conceptual couples, a scientific and precise terminology. Aristotelianism was the intellectual force driving a “school of thought”” (Lucas Bianchi).

Aristotle’s superiority on his master Plato in scientific matters is indisputable : to Plato’s mythological representation of the cosmic order, Aristotle opposes the idea of nature conceived as a reality that “holds in itself the principle of movement”.

A precious copy, wide-margined, rubricated initials, and numerous Latin annotations in the margins.

Provenance: Library of Morandi, with ex-libris.