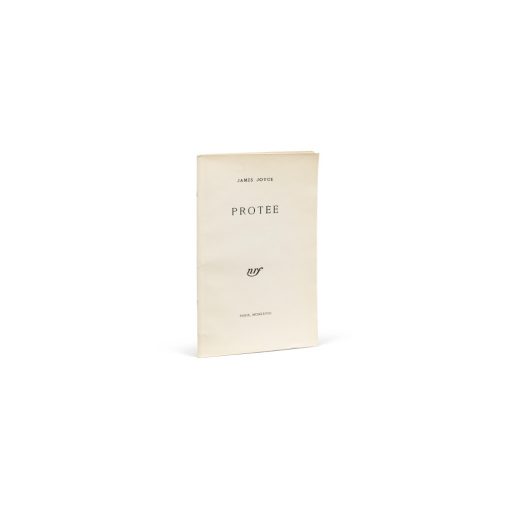 An attractive copy, very pure,
preserved in its original publisher’s wrappers, as issued.

From the intelligent collection of Docteur Lucien Graux, with ex-libris.

First edition in French of the third part of Ulysses, James Joyce’s masterpiece.

In August 1928, the NRF had given as a preview to its French readers the translation of Proteus, the episode in Ulysses where, after the introductory text by Stuart Gilbert, “we hear the interior monologue of a poet [Stephen] who is watching the slow tide recover the polymorphous waste on the strand”.

“Let us turn to the Stephen of the third episode (Proteus), walking on the strand and delivering his meditations in an interior monologue that marks the most decisive invention of the modern novel and, like Edouard Dujardin says, who played a small part, its passage into poetry.” (Jean-Jacques Mayoux)

It is hard to imagine the shock felt by those who read Ulysses for the first time.

Miss Anderson, the ardent American publisher who published Ulysses as a series in the Little Review, confessed to having cried while reading the first lines of Proteus, when Stephen Dedalus is walking on the beach in Sandymount and says : “Signatures of all things I am here to read, seaspawn and seawrack, the nearing tide, that rusty boot.” James Joyce found in Valéry Larbaud a unique translator, an introducer and an ordainer. It is the name and prestige of Larbaud, enthused by his reading of the first episodes of Ulysses published in The Little Review, and then his proposal to undertake and supervise the translation of the book, that pushed, on one hand, Sylvia Beach to decide to transform Shakespeare and Company into a publishing house in order to publish Ulysses in English and, on the other hand, Adrienne Monnier to decide to publish a French translation. Even though he was already quite renowned in the Anglo-Saxon literary world, Joyce was, at the beginning of the 1920s, unable to get Ulysses published. The issues of The Little Review where the novel appeared in episodes were regularly seized and burned because of their obscenities, until the secretary of the New York Society for the Prevention of Vice managed to get the book banned entirely. It is only because of all those ordaining forces in Paris that Ulysses benefited from a double publication.

A precious and appealing copy preserved in its contemporary publisher’s wrappers.

Provenance : the intelligent collection of Docteur Lucien Graux, with ex-libris.