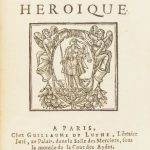 Very rare first edition of Pulcherie by Pierre Corneille that « can be considered an accomplishment in its own right ».

“”Pulcherie” is a heroic comedy in five acts, by Pierre Corneille (1606-1684), performed in Paris in 1672 on the stage of the Théâtre du Marais. The Emperor Theodose is dead and Pulchérie, who is destined to sit on the throne, wants to marry Leon, a young Roman she loves and who loves her. The Senate refuses to approve such a match because it thinks Leon is incapable of accomplishing the duties that would befall him. However, Martian, an old minister from the court who loves the princess but hides his feelings because of his old age is favorable to the future empress’ choice. The Senate appoints the new Sovereign and demands that she choose an Emperor worthy of the Roman people. “I am the Empress and I was Pulchérie”, says the princess who has resolved to sacrifice her love for Leon ; and she offers the Empire to the noble and generous Martian. Leon marries Martian’s daughter, who was in love with him, and is then appointed Prime Minister.

In the preface of Pulchérie, his second-to-last play, Corneille wrote that, even though it was performed by less-esteemed actors (it had been refused by the Hôtel de Bourgogne and by Molière), “even though its aspects are not in popular taste, it never ceased to populate the desert, to give credit to actors whose merit was not known, and to show that one does not always have to submit oneself to the stubbornness of the times to be heard on stage”. His anti-Racine position was here clearly stated. By choosing a topic where the heroin was an Empress passed on to posterity because of her wisdom and a devotion of which her virginity was a symbol, where the emotions of the heart are stamped-down by the necessities of platonic love, where the only surge of love is the one felt by an old man, Corneille knew that he was addressing an audience made up of the old generation, prone to be moved by political and tempered love. A reduced audience, that could make a success but not a triumph, in opposition to the mass of people who ran to cry in front of the fatal passions of the Racinian heroes. Do not doubt : like many of Corneille’s plays, Pulchérie was conceived as a challenge and a wager. But for a man who had already explored all of the paths his sense of innovation opened up to him, the margin was narrow. When seen as a borderline case, the play can be considered as an accomplishment in its own right.” (Georges Forestier)

A beautiful copy, one of the four mentioned by Tchémerzine coming from the libraries of Guy Pellion with ex-libris and Jean Meyer.