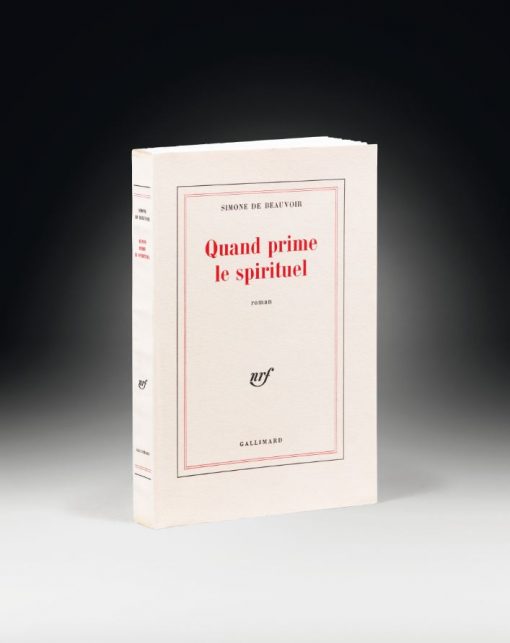 “This small book is quite an adventure, and probably

A beautiful copy,
one of 35 on Hollande paper, under its original wrappers, uncut, as issued.

First edition of Simone de Beauvoir’s first book, written between 1935 and 1938 and originally turned down by Grasset and Gallimard.

One of 35 leading copies numbered on Dutch paper.

« I put a lot of myself in this book. I was rebelling against the spiritualism that had oppressed me for so long and I wanted to express my disgust through the stories of young women I knew and who had been more or less consenting victims. » (Simone de Beauvoir)

For those who know her a bit, the stories in this book resonate with her own life, each shedding light on the other. The book contains all the themes she holds dear : feminism, religious oppression, freedom and infinite solitude.

Simone de Beauvoir sent this manuscript in 1938, the year she turned thirty, to Gallimard and Grasset, who both refused.

In La force de l’âge, Simone de Beauvoir recalls how, from 1935 to 1937, she wrote her first book, Quand prime le spirituel, which remained unpublished for a long time.

« I decided this time to write short stories. I would limit myself to the things, the people I knew ; I would try to render sensitive a truth I had personally experienced. The theme is revealed in the title I ironically borrowed from Maritain. The first story describes one young woman coming to pieces at the Sainte-Marie institute. In the second, I imagined the degradation of the religious sentiment in an adult protagonist. In the third, the heroine, stubbornly playing a role, makes life hell for two young students who admire her. I had managed to convey the distance between one’s self and one’s self that is bad faith. In the fourth, I tried once again to resuscitate Zaza. And failed. Fifth short-story : a satire of my youth. My childhood at the cours Désir and the religious crisis of my adolescence. This last one was by far the best story… Sartre approved of many passages. »

« In her early years, Beauvoir already had the talent – which will culminate in her Mémoires – of immersing the reader in a particular time period, with its social conventions, its stereotypical behaviors, its errant ways. Her heroines all face choices, have to grapple with their inherent contradictions, and she describes them with humor, savageness — and compassion, for Anne. » (Josyane Savigneau)

A beautiful copy, one of 35 printed on Dutch paper, of this literary first edition, uncut, in its original wrappers, as issued.